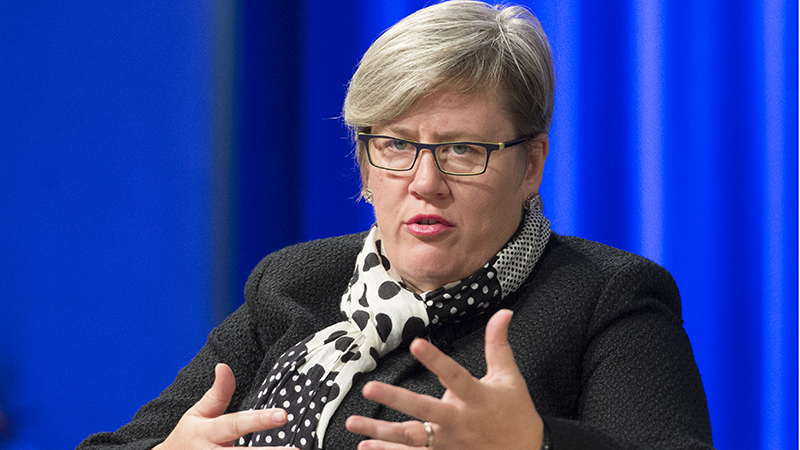 The global lender is driving efforts to put a price on a pollution as a key tool to slash CO2 emissions and tackle climate change.

But clarity on how to roll out carbon pricing as part of a global warming pact wasn’t critical, said Kyte.

What mattered was aspiring countries recognised the inevitability” of the practice and could call on institutions like the WB, OECD and IMF to help them craft their versions.

She told a briefing: “while you might not see a detailed negotiation on the mechanics of future carbon pricing regimes, I don’t see that necessarily a bad idea. I don’t think it should be negotiated there.

“What we’re seeing on the Monday morning out of Paris is to implement low carbon growth you need to get your prices right… We will help you to do this.”

Kyte spoke at the launch of a Sunday report showing carbon markets have almost doubled since 2012, with 40 nations and 23 cities, regions and provinces now pricing pollution worth $50 billion.

Initiatives in China and the US are the biggest players, with 7 billion tons of CO2 or 12% of global emissions now included.

The World Bank together with the OECD and IMF set out six principles to accelerate the take up of markets.

“Carbon pricing is central to the quest for a cost-effective transition towards zero net emissions in the second half of the century,” Angel Gurria, OECD secretary general said in a statement.

Several national pledges from the likes of New Zealand and Singapore have floated the possibility of setting up markets to increase their cuts in emissions to help cap warming to 2C by 2100.

Yet leftist governments in South America and the Pope have scolded the use of credits, arguing it wouldn’t reduce pollution and commodified nature.

Business group IETA stressed the need for carbon pricing’s inclusion in the outcome of the Paris summit.

Commenting to RTCC, chief executive Dirk Forrester said: “Business is looking for a sign in the Paris Agreement on the future policy framework – and whether it will allow for linkages between pricing systems. The obvious choice is via market mechanisms.

“Paris is the time to set the parameters for the future global climate response, with the nitty gritty to follow quickly to incentivise early action.”

The latest version of the UN negotiating text for Paris gives two options for market mechanisms, with one allowing countries to use programmes like REDD+, the Clean Development Mechanism or new forms to cut carbon. The other option leaves them out entirely.

With companies free to opt into markets under national plans, a Paris agreement differs from the rigidity of the Kyoto Protocol which in effect capped the level of emissions.

A key debate is how a patchwork of jurisdictions’ markets are connected to be more effective in cutting carbon.

Most businesses with large carbon footprints are internally pricing their emissions, partly in response to fears from some investors that climate change could hit their financial gains, according to a May report.

In July, in a welcome move the CEOs of five European oil majors came out calling for a carbon price.

The Oil and Gas Initiative, which includes Sinopec, Saudi Aramco and Pemex has said it will soon unveil how it will contribute to a greener future, while Kyte said further announcements from industry to pep up carbon pricing’s advances were likely before the summit.