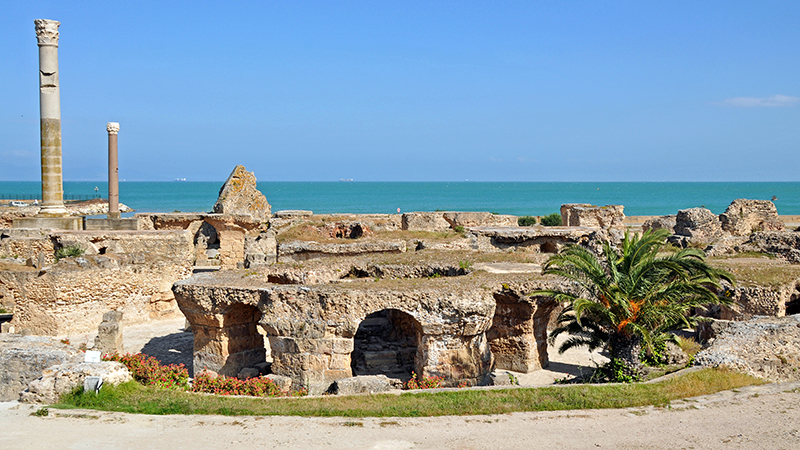 The Antonine Baths, roman ruins near capital Tunis. The government expects sea levels to rise up as much as 50cm within 35 years (Flickr/ Dennis Jarvis)

Climate change could destroy tens of thousands of jobs in Tunisia’s tourism and agriculture industries, as sweltering temperatures bring droughts and coastal erosion, the government said on Wednesday.

Africa’s northernmost country is on track to warm 2.1C by 2050, leading to erratic rainfall and sea-level rise of 30-50cm gnawing away at its 1,300-kilometre coastline, it said in the submission to a UN climate deal.

Retreating beaches would visit $2 billion losses in damaged infrastructure such as ports and seafront hotels, trimming 0.5% a year in GDP from its $47 bn economy.

“Tourism in Tunisia essentially revolves around its image as a beach and seaside resort, which means that it is particularly sensitive to the summer climate, rising sea levels and coastal erosion,” read the communication.

$2 billion over the next 15 years would prepare the sectors through sea defences and irrigation, which “should be borne completely” by the international community for causing global warming, said the government.

That climate bill is running into the hundreds of billions as poor nations submit Paris pledges. Rich countries have committed to mobilise $100bn a year by 2020.

Tunisia also committed to reducing how much carbon it emits per dollar of GDP by 13% by 2030.

Cuts in ‘carbon intensity’ could increase to 41% compared with 2010 levels on international support, while it considered the potential for solar energy. Those would lead in its fossil fuel-heavy energy sector.

The news darkens the prospects for the country’s tourist industry, roiled by a massacre of 38 holidaymakers claimed by ISIS in July.

The government has since adopted stronger counter-terrorism laws to protects its citizens and tourists from jihadist threats.