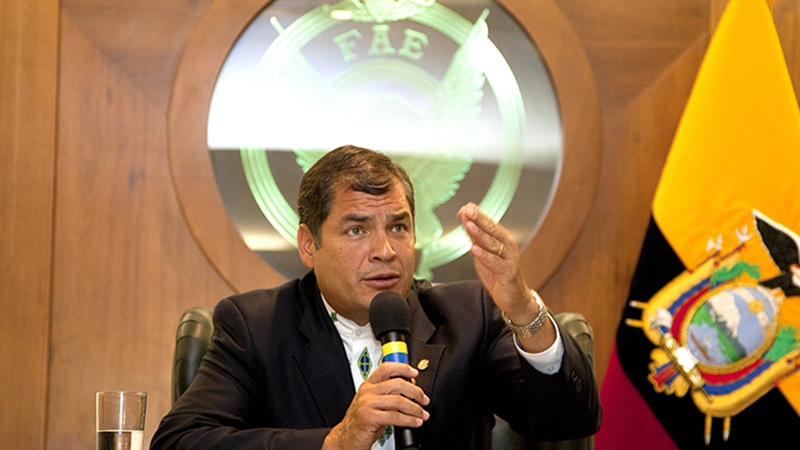 President Rafael Correa is set to write a newspaper op-ed to make the case for his country’s innovative climate proposals ahead of Paris (credit: Wikimedia commons)

Ecuador favours a small tax on oil exports rather than depending on rich countries for climate cash, according to a top climate envoy.

The smallest member of OPEC, a club of oil-producing countries, Ecuador is calling for a global levy to raise funds for climate projects in the developing world.

A 3-5% tax on every barrel of oil exported to the developed world could raise US$30 billion a year for the UN-backed Green Climate Fund, Daniel Ortega Pacheco told RTCC.

Due to falling oil prices, that figure has dropped from $80 billion projected Ecuador floated the idea at an OPEC meeting in 2013. But it is three times the sum donated by governments so far.

“When we see rich countries are not living up to promises, that’s why Ecuador in a separate fashion is calling for a new ecotax to raise taxes for the Fund,” said Ortega.

“You can generate much more money and at the same time reduce emissions.”

Finance to help poor countries meet their climate goals is critical to the global deal due to be struck in Paris this December.

Countries so far have pledged $10 billion for the South Korea-based GCF to channel into projects that cut carbon and build resilience to extreme weather.

Not all have paid up, with the $3 billion US contribution at risk of being vetoed by Congress.

And there is still uncertainty over how rich countries plan to meet their commitment to mobilise $100 billion a year by 2020. 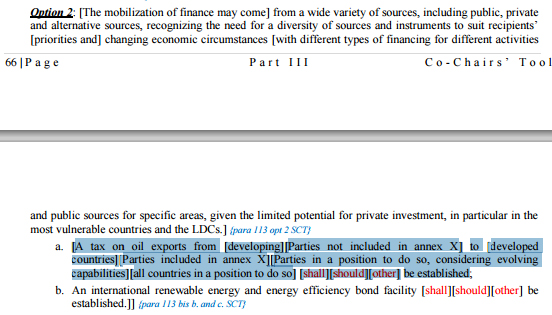 Ecuador’s proposed oil export levy failed to win support from OPEC. Ortega admitted it “would be suicide for any country pushing for incentives on exploitation of oil”.

But it showed Ecuador’s commitment to the climate agenda, he said. “We are changing our energy mix.”

A slump in the oil price has roiled Ecuador’s economy, which relies on crude for a third of its state budget. In August it became the first OPEC member to admit it was pumping oil at a loss.

Known as a Daly-Correa tax, after the World Bank economist who proposed it and Ecuador’s president, the proposed oil export levy is on a long list of potential elements of a Paris deal.

Meanwhile, the South American country has yet to submit an “intended nationally determined contribution” (INDC) ahead of the UN’s 1 October deadline.

Ortega said Ecuador wouldn’t bow to pressure to deliver the INDC and criticised the “simple promises” of the likes of Morocco, Macedonia and Kenya that have made explicit requests for cash to meet their climate targets.

“They have to mean something. That’s why we continue to promote the tax.”

A maverick at UN talks, Ecuador has put forward the idea of “net avoided emissions” and made headlines with its abandoned plan for countries to fund conservation of oil-rich Amazon rainforest.

In 2007, wealthy countries and donors were asked to stump up US$3.6 billion to keep 846 million barrels of oil worth around US$ 7.2 billion in the ground. That was predicted to avoid over a billion tonnes of carbon dioxide emissions in a 30-year period.

The country, which plans to unite Latin America behind a crusade for climate justice at the Paris summit, has come under fire for its own treatment of environmental activists.

Humans Rights Watch have warned of a crackdown by President Rafael Correa, citing an executive order intended to muzzle NGOs. Indigenous groups in the Amazon basin have marched to capital Quito to file their complaints.

Freedom House and the Committee for Protection of Journalists have voiced concern of declining press freedoms, particularly with respect to reporting on environmental stories.

Ortega said there was freedom of expression and the government was consulting civil society on its climate plans.

“We are conducting a citizens’ revolution for the majority of the population, particularly for the poor.

“If you ask them if they can speak in the country they will say we definitely can. We can’t make possibilities for a few over the whole.”

Rolling out 3 million clean cookstoves and getting 96% of its electricity from “fossil-free sources” make up some of its contributions, Ortega said, while the exploitation of its natural resources will be fair for all.

“We need to distribute domestically, its part of justice. If we promote justice at international level, we have to do it internally with all revenues remaining in the territories.”