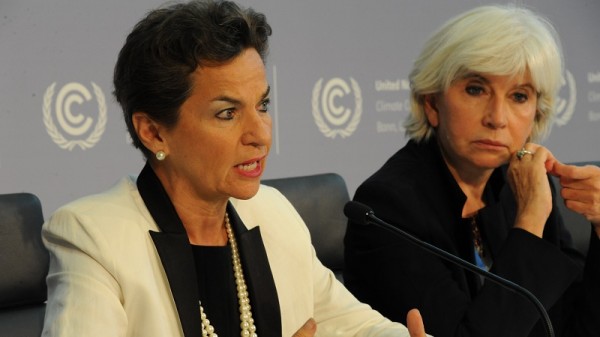 Christiana Figueres and Laurence Tubiana give a press conference (Flickr/UNclimatechange)

Work on building a global climate deal showed progress on the final day of a UN conference in Bonn, with officials chairing the process revealing they would release a new, slimmer draft text in early October.

“What I hope we will be able to do this next time is something that will truly be a better basis for the parties to go forward, see the issues from end to end and negotiate on the substance in detail – with options,” he said.

UN climate chief Christiana Figures said work on the new text, which received wide support from all 195 governments on Friday afternoon, would represent a “change of pace” at the talks.

The current set of proposals ranges to over 80 pages and encompasses widely differing views on how the world can avoid global warming above the 2C danger level.

Most observers RTCC spoke to said the document as it stood was not suitable but few countries at this week’s talks have offered a sense of how the text could be radically slashed in time for a December summit where a deal is set to be signed off.

Reifsnyder said progress had been made on clarifying the general objectives of the deal but admitted talks on who will provide climate finance and adaptation were complex.

Inaction kills – one of the few “actions” from youth at #ADP2 this week pic.twitter.com/sdQYaDDkWm

France’s chief climate diplomat Laurence Tubiana acknowledged the slow pace of the talks, but said it had allowed countries to “know the position of everybody”.

“Now we have to go from this to a global picture and assemble all the pieces of the puzzle,” she added.

WWF climate talks expert Tasneep Essop said news countries would allow the co-chairs to craft a text was a sign of the trust they had built with countries since taking control of talks in January.

“We would want to leave this session with a very clear idea of what the next steps are in terms of a text that can be negotiated from day 1 in the October session,” she said.

Elina Bardram, lead negotiator for the European Union, said a new draft text should be concise, wipe out duplicated ideas and offer a coherent narrative.

“This would allow us to make real headway in the negotiations,” she said.

Initial steps to cut the text down to size started this week, revealed veteran climate negotiations expert Alden Meyer from the US Union of Concerned Scientists.

“I don’t know how far they have gone but work has started and those parties can continue to work jointly between now and October to make suggestions of additional proposals,” he said.

Five days remain for discussions on a global deal ahead of the two-week Paris summit. A final Bonn conference is scheduled for the end of next month.