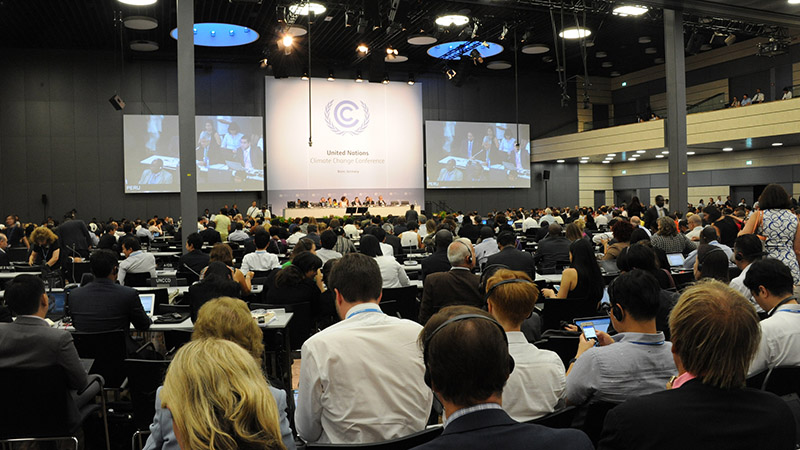 Opening remarks from leading climate envoys at a UN meeting in Bonn illustrate just how much work is needed to craft a global emissions slashing deal by the end of the year.

The latest round of 5-day long negotiations started on Monday, with over 190 countries tasked with whittling down a vast set of proposals into a concise document they can all agree on.

UN officials remain confident a pact will be finalised in Paris this December, with a goal of limiting global warming to below an agreed 2C limit.

But as the excerpts from statements made by groups representing participating countries illustrate, it’s still not clear exactly what a final agreement will look like.

Sudan on behalf of the African Group

“We have strong reservations on the text as presented in your tool, as well as the work methods proposed for this session.

“The Group reaffirms that loss and damage is very critical to the core agreement, so as the linkage between inadequate mitigation ambition with adaptation and loss and damage;

“The Ministers further emphasised the importance of scaling up financial resources for the period beyond 2020, as a deal in Paris would be impossible without clarity on this matter.

“To close the growing gap between our collective efforts and a pathway consistent with 2C or 1.5C, this workstream must move from deliberation to action and implementation.

“We share the view of other G77 plus China members that the decision can be strengthened to include a concrete process to accelerate implementation of the Convention; to further strengthen the technical examination of opportunities with high mitigation potential; to ensure balance and raise the profile of adaptation in the pre-2020 period through a more elaborated technical examination of adaptation.”

Maldives on behalf of AOSIS

“There is no time to waste. Just last week, NASA released findings that show the world may already be locked into one metre of sea level rise—putting many small islands and low-lying coastal states at risk for severe flooding if not total inundation by the end of the century.

“With respect to mitigation, it is critical that a pathway to achieving below the 1.5 degree global goal is reflected in the Paris agreement. The agreement must do more than institute a new process; it must also deliver outcomes and demand ambitious performance

“Developed countries must deliver on this commitment and further commit to scale up the provision of support beyond 2020 if we are to realise the level of ambition required to avert the worst impacts of climate change.

“An international mechanism to address loss and damage must be a central element of the Paris agreement.”

Luxembourg on behalf of EU

“We must make progress in the coming days on substance: Firstly on how the 2015 Agreement will deliver transparency and accountability of Parties’ against their mitigation commitments. Secondly, on how to ensure dynamism in the 2015 Agreement, across all elements.

“For mitigation this means how to secure a process to regularly revisit and, if necessary, raise ambition over time to collectively achieve an agreed long term goal.

“Thirdly, on how to ensure that the 2015 Agreement contributes to achieving climate resilient sustainable development and reduction of vulnerability through effective adaptation. Fourthly, on how the post 2020 regime will provide support to those countries in need.”

Chile on behalf of AILAC

“The Agreement must include an ambitious objective that catalyses action towards the achievement of a long term mitigation goal.

“A short‐term commitment cycle is the most effective way to create an agreement that is capable of triggering countries to frequently revisit and enhance their ambition, significantly increasingly the momentum towards reaching the objective of the Convention and the 2C goal.

“These commitment cycles, as well as a specific long‐term emissions trajectory that reflect the latest recommendations of the IPCC, a definition of a long‐term qualitative goal on finance and a global adaptation goal will also be critical to securing an ambitious and durable agreement.”

Saudi Arabia on behalf of the Arab Group

“The mechanism as proposed is not balanced and not exhaustive and consistent with the primary objective of the decision of Durban [COP17].

“We would like to focus on the importance of transparency and inclusiveness of all parties as a necessity to ensure justice and the success of the negotiations.

“The Arab Group hopes for serious negotiations between the parties to avoid the last-minute imposition of texts.”

Malaysia on behalf of the Like Minded Developing Countries

“Whether the Paris outcome is ambitious and could be implemented in a sustained manner depends on whether it is consistent with the principles, provisions and structure of the Convention.

“It is not to renegotiate, rewrite, restructure or replace the Convention or reinterpret its principles and provisions.

“The concepts or approaches such as ‘evolving CBDR’, ‘Parties in a position to do so’, ‘single transparency system’ or ‘mitigation-centric cycle’ are not consistent with the principles of the Convention and are not acceptable. Therefore these concepts must be removed from the text.”

China on behalf of BASIC (+ India, Brazil and South Africa)

“We are concerned with the inadequacy of developed countries’ current commitments on emission reductions and provision of financial and technological support.

“We underscore the need to shift the focus of the technical examination process from the mere identification of mitigation policy options to the identification or development of instruments that support effective and concrete implementation of such policies, based on the intrinsic social and economic value of voluntary mitigation actions and their co‐benefits to adaptation and sustainable development.”

Switzerland on behalf of the Environmental Integrity Group

“We would like to thank the Co-Chairs for the tool they have developed based on the Geneva text and the discussions of our last session.

“This compilation is a useful step towards an agreement but we share the views of others that this tool is not sufficient, that it has many important gaps, inconsistencies and duplications.

“But: the tool gives us a good idea how the Geneva Negotiation Text could be structured into an agreement and COP decisions. Therefore, it can be very helpful for our discussions and negotiations.”