Developing country was hailed for early climate pledge, but the Senate is being slow to sign off crucial renewables law 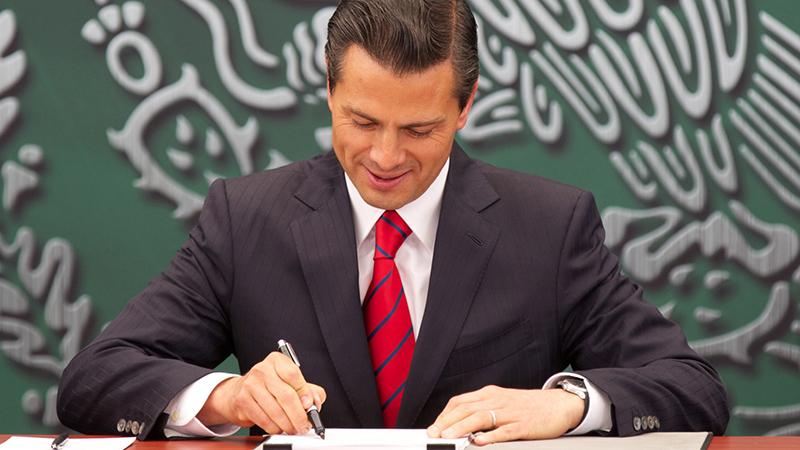 Mexican lawmakers’ apathy to pass its prize climate policy is stunting the potential of its wind and solar industry, say experts, dimming its green reputation.

The “energy transition law” paved the way for renewables to provide 35% of the Latin American country’s electricity needs by 2024, up from their 14% share last year.

With wide scope for wind in blustery Oaxaca, and solar in sun-drenched Sonora state, that target isn’t “beyond the realm of possibility,” says Duncan Wood, director of the Mexico Institute at the Wilson Center, a think tank.

But the so-called “green package” still languishes in the Senate, nine months after the lower-house passed it, and more than year behind schedule.

“What’s clear is that this isn’t a legislative priority. The government is distracted,” adds Wood.

Fast-tracking the privatisation of the country’s oil and gas industry is higher up the agenda. Officials are readying a second auction of five offshore oil blocks for September after its first flubbed.

In tying together several strands of policy like a carbon tax, clean energy certificates and feed-in tariffs, the package is a comprehensive assault on climate change.

The government has vowed to slash greenhouse gas emissions 22% below current projections by 2030. Heat-trapping gases will peak in 2026, it said in March.

The country of 124 million people won plaudits when it unveiled its contribution to a UN-backed global warming agreement at the end of the year – the first nation classed as developing to do so.

“It really blazes the path for others – developed and developing,” said Jennifer Morgan at the World Resources Institute.

“The relative target is not everything one might hope for, but given Mexico’s economic growth, there is reason to be cautiously positive,” wrote Brown University’s Timmons Roberts.

But the renewable target is central. It could cut emissions 95-115 million tonnes by 2030, about half of the mitigation effort, according to Jorge Villareal, an independent energy analyst.

“It’s a tool the federal government can use to show off the forward strides of climate policy in Mexico.

“It can follow the US, EU, China that have committed ambitious carbon-reduction goals with a bold accent on decarbonising their energy matrices,” he tells RTCC from Mexico City.

After a summer recess, Senate re-opens in September, giving an opportunity for at least a debate, if not approval, of the bill.

The energy ministry, business associations including the largest cement-maker Cemex, and NGOs are driving support. Lobbyists from the fossil fuel industry lead the countercharge.

Signing off on it before the Paris summit in December would be a strong statement, but Villareal concedes he wouldn’t bet on it.

“I think it’s a challenge. Climate targets tend to be a bit aggressive at first. It’s a tall order for this to be executed,” says Christian Gomez, energy director at the Council of the Americas.

Mexico’s partnering with the United States, through cooperation on fuel economy standards and developing better electricity connections, had potential for carbon cuts.

“Wind is blowing up right now,” says Gomez, as prices have fallen and investments are getting underway. But stronger incentives are crucial.

Of renewables’ 14% share of Mexico’s energy mix in 2014, wind, solar and geothermal make up 3%. As in many countries in the region, hydropower eclipses those sources with a 11% stake.

Away from a stalling upper chamber, NGOs have criticised the environment ministry Semarnat for cutting itself slack in its carbon-reduction targets.

Ministers revised downwards the country’s past emissions on calculations made in its National Strategy on Climate Change (ENACC) in 2010, analysts at the Mexican Center for Environmental Law said.

The adjustments allowed the government to increase what it could emit in 2030 from 605 to 792MtCO2e.

For CEMDA’s Ana Mendivil that boost is concerning: “We want to know why the baselines were modified and so, if the calculations are justified.”

As more accurate data on population rise and GDP becomes available baselines change, Mendivil acknowledges, but she wants Semarnat to make public its methodology to dispel fears it is toning down targets.

Semarnat didn’t respond to requests for comment on the figures.

The totals are small, but they have implications for a country viewed as a regional leader on climate change. The Dominican Republic is the only other country in Latin America and the Caribbean so far to have submitted a climate pledge to the UN.

But for Wood at the Wilson Center, implementation of the package is the ultimate test of Mexico’s commitments. He doesn’t expect the law to go through until 2016 at the earliest.

But president Pena Nieto’s zeal to post its plan in March, meeting an informal UN deadline, was a positive step. Commitments under the gaze of international partners are made of stronger stuff than domestic ones, he says, citing Mexico’s adherence to the North American Free Trade Agreement.

As the government spurs investment in its cosseted fossil fuel industries, the time to endorse renewables is now, adds Mendivil. “If we don’t pass the energy transition law, everything is sloped toward hydrocarbons.”