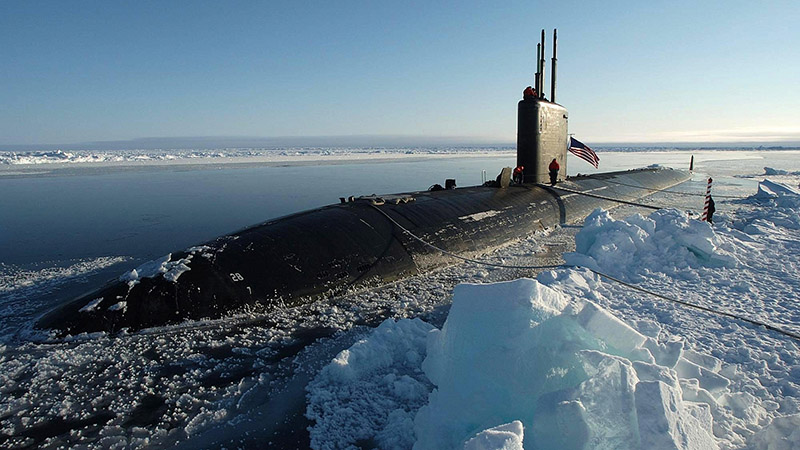 A report presented to lawmakers this week recommends more resources should be directed towards Arctic-specific training as warming conditions allow greater access to the region.

“Arctic operations are expensive and dangerous for military forces that are unprepared for the austere operating environment.”

Global warming is “not strictly a long-term risk” they add, stressing the Department of Defense sees climate change as a “present security threat”.

Despite recent news of a small Arctic sea ice recovery, its extent has slumped 40% since the 1970s.

Meanwhile, interest in the region’s resources and potential as a shipping shortcut is fast increasing as temperatures warm.

Cruise liner Crystal Serenity plans to sail the North West passage in 2016 with 900 passengers, while Shell is among a number of oil companies sending drilling rigs to explore the seabed.

The oil major’s CEO Ben van Beurden insists it has made all necessary arrangements to avoid an environmental disaster, but the Pentagon report suggests the military is less than prepared.

The warning comes as Greenpeace activists block the path of Shell icebreaker Fennica in Portland, in protest over the environmental threat.

Security risks linked to military operations and other shipping activities are also likely to rise as the ice cap melts, according to US Northern Command (USNORTHCOM).

Impacts and shocks are also being felt in other theatres where the US military has an active presence say the planners, citing impacts in Africa, Asia, South America and the Middle East.

They say the military is already building new emergency operations centres and shelters, investing in clean energy technologies and assessing the risk to coastal bases from rising sea levels.

US Africa Command believes famine and disease are the “most likely” climate risks, with weak states and vulnerable populations at acute risk.

In recent years the Pentagon has made increasingly strong calls for more resources to tackle the potential impacts of climate change.

In May 2014, Vice Admiral Dennis McGinn, assistant secretary of the Navy, said the threats posed by warming temperatures were “overwhelmingly” clear to all in the military.

Rear Admiral David Titley, a retired officer who started the Navy’s task force on climate change, said the most recent findings underlined the need for more climate-themed investment in the military.

“This report demonstrates that the Geographic Combatant Commands are already facing the security risks of a changing climate in the battlespace – a risk that will make their jobs dealing with many other risks all the more difficult,” he said.

“Now it’s time for Washington to give them the tools and resources they need to manage this risk.”