Land is more than a pile of rocks, says Kathy Jetnil-Kijiner; it has eyes to see people’s greed and punish them 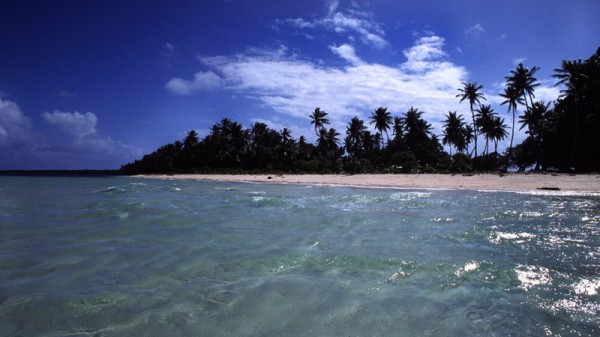 A few weeks ago I sat down with a CNN reporter who was in the Marshall Islands writing an article on climate refugees. One of the things we discussed was the importance of land to the Marshallese people.

He explained that many Marshallese have told him that the loss of our island to the rising seas from climate change would be devastating. But he wanted to know – why? Why would losing our land be so devastating?

I honestly didn’t know how to respond to this. It seemed pretty obvious to me. It’s our land – it’s our home. But he clarified further that his audience – mainly Americans – might not understand the value of land to our identity and culture. Some might say that we could just pick up and move somewhere else if we lost it. Why would that be so hard? Could I explain it?

I thought about his question. After a while, the story of Liwātuonmour and Lidepdepju came to mind.

I came across this story while doing research for my thesis two summers ago. Liwātuonmour and Lidepdepju were sisters who came to the Marshall Islands from Ep, thousands of years ago. They were pillars of basalt stone who birthed the clans and the Irooj (chiefly) line.

Some say they had the power to bring Irooj back to life. Others say their stone bodies were used to sharpen knives and spears before battles. What can be agreed upon is both of the stone sisters were highly respected, and that one of the stone sisters, Liwātuonmour, went to live on Namo atoll while the other, Lidepdepju, can be found on Aur Atoll.

During the time when missionaries first came to the Marshalls, a Protestant missionary named Dr. Rife threw Liwātuonmour’s stone body into the depths of the ocean, in an effort to stamp out “pagan” practices / eliminate the competition. Lidepdepju, however, can still be found on her place in Aur.

I met Lidepdepju years ago, when I first moved back to the Marshall Islands after 16 years of living away. While visiting Aur, one of the islands my family comes from, my mother told me to go out and see Lidepdepju. I didn’t know much about her except that she was one of the important legends for people from Aur.

Once I got there all I saw was a pile of rocks, maybe up to my knees, out on the reef. Needless to say – I was unimpressed. There was no massive stone alter, no crashing waves, no thunder and lightning, no flowers or spears – nothing to fit into my Disney-addled cartoon imagination. It really was just a pile of rocks. I didn’t understand the significance. I left, feeling a bit underwhelmed.

When I returned to the Marshalls to do my research a few summers later, her story came up once again. And then I became obsessed. I wanted to know why this story was so important – why this pile of rocks?

I interviewed four elders during the summer that I was doing research for my Master’s thesis. I asked them all about Lidepdepju. Why? Why was she so important to us, to our stories?

The response that stayed with me the most was from Alfred Capelle, head commissioner for Customary Language and Law Commission (CLLC), and a noted Marshallese historian, linguist, and cultural expert.

According to Capelle, the value in the story of the stone sisters is one of permanence. Our ancestors saw those same stones, and their ancestors, and so on. They told the same story, the story of the beginning of our clans. How we came from stone, from earth. And hundreds of years later, our children would see them as well (Unless they wouldn’t. Because, you know, climate change).

Either way, these stones are not just imagined spirits – they are tangible. They are real. They live in the waves and our ancestors sharpened their spears on their bodies. I was able to tread slippered feet from the house of my family members, past a grove of bushes and trees, to see her for myself – thousands of years after my ancestors first whispered the story over an open fire.

Our islands are full of stories like these. The infusion of magic and tangible – stories that to the Western imagination might seem fantastical. Stories that explain the spirit of a coral, how a lagoon was shaped, how a grove of pandanus trees was born.

‘The land has eyes’

There are no stories where the mother, the land, is slaughtered so that the people satisfy their greed – at least not without punishment. Greed is punishable. Greed is remembered. As the Rotuman proverb states – the land has eyes. There is a roro, a Marshallese chant, about Lidedepju that also demonstrates this:

Land has power to destroy us. It has eyes. It remembers.

Climate scientists have been warning that catastrophe will hit if humans do not make radical changes to our lifestyles of consumption and greed. The world will turn on us. Super storms and massive droughts, extinction and rising seas. Mother nature is pissed. Luerkoklik is destroying me… is destroying all of us.

“Indigenous people are trotted forward as mouthpieces, mined for their wisdom, highlighted for their tragedies, and then shoved to the back of the line”

Indigenous people have been saying this for decades, for centuries. And yet only now do we see the same rhetoric being co-opted by green activists in the climate movement. Indigenous people are trotted forward as mouthpieces, mined for their wisdom, highlighted for their tragedies, and then shoved to the back of the line.

Mauna Kea is a sacred land for the Hawaiian people. Through the tireless efforts of organizers, and the support of Hawaiian and indigenous people all over the world, the movement has been able to postpone the building of a massive telescope that would desecrate the sacred mountaintop of Mauna Kea.

As I write this, I see photographs on my facebook newsfeed of Hawaiian activists being arrested for obstructing the construction company. Governor Ige has issued a statement that the construction is once again delayed due to the protestors, as well the large boulders, hindering the construction equipment. The earth, and its champions, have spoken.

Pacific Islanders and indigenous peoples play an important role in the climate movement as well. This is even acknowledged in the Pope’s encyclical that was released last week. We are here to remind others, industrialized nations, leaders, major industries, that the earth has always been alive – that the land has eyes. It remembers. It will continue to remember. Long after we leave it.

Kathy Jetnil-Kijiner is a poet, journalist and teacher from the Marshall Islands. You can read more of her writings on her website, or follow her on twitter @iepjeltok