Finding that world must reach zero emissions this century is significant, even though critical phrase was omitted 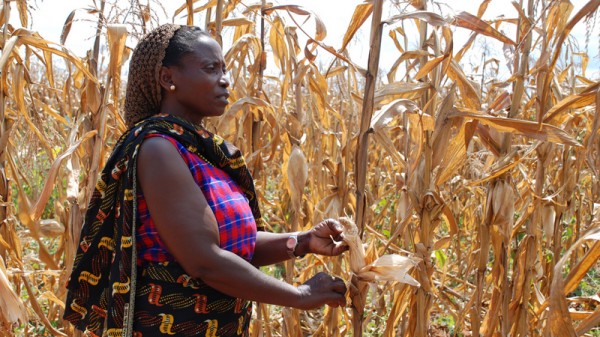 “Depending on value judgements”, climate impacts like lower maize yields “might already be considered dangerous,” according to a deleted line in the IPCC report
(Pic: Flickr/CIMMYT)

The latest UN report on climate science may have made an important intervention in negotiations on an international agreement to slow greenhouse gas emissions, even after being watered down.

The Intergovernmental Panel on Climate Change (IPCC) on Sunday summarised its latest review of climate science, an assessment it undertakes every six years.

The final draft of this “synthesis report” was widely leaked in September, meaning it is easy to see the changes agreed during a debate between the report authors and government experts last week.

In the process, it lost a very important reference, where the IPCC had raised the possibility that the world was collectively in breach of the UN Framework Convention on Climate Change (UNFCCC), by failing to avoid dangerous climate change.

However, the report also made a possibly important contribution to negotiations on a new international climate agreement.

It elevated to its main summary a reference that the world must eliminate net greenhouse gas emissions this century, to keep global average warming below 2C.

Such a long-term goal could be the most significant line in a climate agreement, which countries are meant to commit to in Paris at the end of next year.

Countries have already agreed to limit global average warming to 2C: they agreed in a UN decision at a conference in Cancun, Mexico, in 2010, that they “should take urgent action to meet this long-term goal”.

The trouble is that such a goal is useless unless it is paired with relevant action: countries have so far resisted a long-term emissions goal to go with it.

A Paris agreement must set out a goal to achieve zero net greenhouse gas emissions this century, as the next step in avoiding dangerous climate change.

The final IPCC report summary states: “There are multiple mitigation pathways that are likely to limit warming to below 2C relative to pre-industrial levels. These pathways would require substantial emissions reductions over the next few decades and near zero emissions of CO2 and other long-lived GHGs by the end of the century.”

It elevated last week that text to its “summary for policymakers”, from a section deeper in the report.

The world has so far warmed by 0.85C since pre-industrial levels, and buried deep within its latest supporting chapters, the IPCC adds a further 0.6C this century even if greenhouse gas emissions halted entirely, because of inertia in the warming of the world’s oceans (find on page 1,106, Chapter 12 of Working Group 1).

In other words, the world has already locked in more than 1.5C warming by the end of this century, and substantially more, given that the 0.6C refers to annual emissions as of the year 2000, and these have accelerated since and will continue for many more decades.

It is important that the world does its best in Paris to lock present climate action to a long-term emissions goal.

That is because, with the best will among climate scientists, environmental groups and concerned citizens, politicians are not yet ready for a “grand bargain”, to solve the problem once and for all.

In Paris, countries will commit to climate action beyond 2020 which will be inadequate to avoid dangerous climate change.

However, by additionally committing to review progress every five years, in the light of a binding global goal to eliminate greenhouse gas emissions this century, they will launch a continuing diplomatic process which can end with achievement of this goal.

The first drafts of a text for a Paris Agreement show that such a long-term goal is on the table (top of page three, here).

In a step backwards, the IPCC last week deleted three pages from its summary report which alluded to the possibility that the world already had breached its commitment to avoid dangerous climate change.

The deleted text referred to Article 2 of the Climate Change Convention, where all countries committed in 1992 to stabilise “greenhouse gas concentrations in the atmosphere at a level that would prevent dangerous anthropogenic interference with the climate system”.

The remit of the IPCC, formed in 1988, is “to provide the world with a clear scientific view on the current state of knowledge in climate change”.

The deleted text said that: “Depending on value judgements and specific circumstances, currently observed impacts might already be considered dangerous in specific sectors and locations, or globally.”

The deleted text referred to present impacts of manmade climate change, including: more frequent extreme heat waves and rainfall; changing geographic distribution of species; bleaching of coral reefs; melting of Arctic sea ice; growing water insecurity in some regions; and negative impacts on global average wheat and maize yields. These impacts are still referred to elsewhere in the report.

It appears that the text was deleted altogether because last week’s debate ran out of time to agree a mutually acceptable version. That is a loss, but countries can make up for it by committing in Paris to a long-term goal to eliminate next greenhouse gas emissions this century.