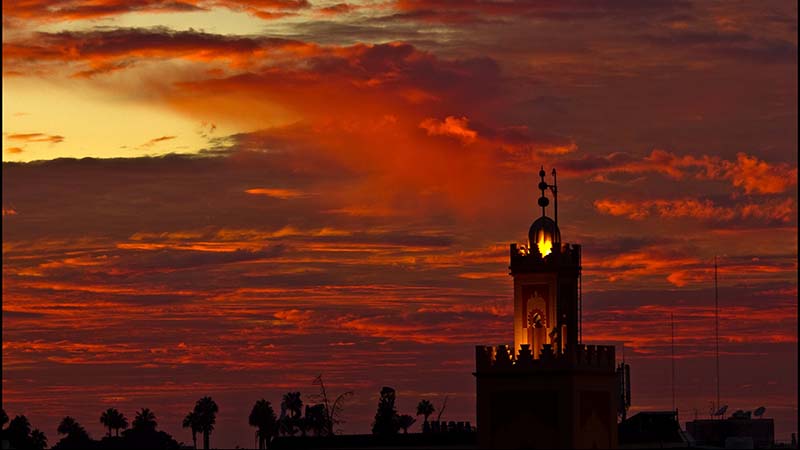 Sunset over Marrakech. 5.5% of Morocco’s budget was spent on energy subsidies in 2011 (Flickr/ Elvin)

Morocco, a desert kingdom that imports 90% of its energy, vowed to slash fossil fuel subsidies as its delivered its carbon-cutting pledge on Friday.

The first Arab country to submit an “intended nationally determined contribution” in the UN lexicon, it will target up to a 32% cut in 2030 greenhouse gas emissions from business-as-usual levels.

Slashing subsidies for oil and gas will be one of four main levers in overhauling its dirty energy sector, together with boosting renewables and ramping up imports of lesser-polluting natural gas.

It is the 40th nation to put forward its draft climate action plan, with more than a hundred still to come. These will form the foundations of a global climate deal set to be agreed in December.

According to the IMF, by 2011 energy subsidies accounted for 5.5% of Morocco’s GDP and 17% of its investment budget. In the Middle East and North Africa alone they cost $212 billion.

And to quell protest during the Arab Spring, the government increased the handouts to lower the cost of living.

Having ballooned to 7% of the budget, these subsidies must fall to 3% by 2017 as a condition of IMF loans. Steps began in late 2013 to eliminate subsidies on gasoline and fuel oil, according to the International Energy Agency.

The price of a 25-pound butane canister used in cooking was 42 dirhams or $5 in 2014, though it traded for $14.50 on commodities markets, Al Jazeera reported.

Morocco, which produces a minor 0.2% of world emissions, says it is “voluntarily and resolutely engaged in a process to combat global warming”.

Of the 32% pledged emissions cuts, 19% are conditional on access to funding by rich countries.

The Green Climate Fund, will help provide the $35 billion of $45 billion investment needed to honour its emissions pledge, the submission states.

Renewables will rise to 42% of installed electricity generation, with wind, solar and hydroelectric power making up 14% each.

The North African country said it was growing more vulnerable to climate change and would have to desalinate water for drinking and plant 200,000 hectares of forests.

In another sign of commitment from the expected host of the 2016 annual round of UN climate negotiations, the EU and Morocco are to run an INDC forum in October to assess overall progress on staying within a 2C temperature rise by 2100, said Europe’s climate commissioner Miguel Arias Canete.