INTERVIEW: Marcin Koroloc on Paris talks, differentiation, EU unity and why the ETS is on a hiding to nothing 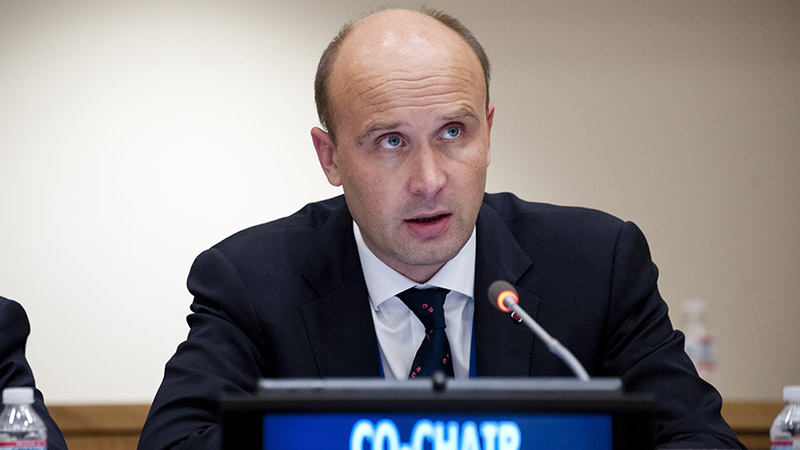 Don’t judge the outcome of a Paris climate deal on the amount of emissions it culls, rather focus on the number of countries who have signed up.

That’s the message from Poland’s climate chief Marcin Korolec, one of the key players over the last four years in developing a global pact due to be finalised this December.

“The most important notion is participation – that is the crucial challenge ahead of all of us. How to enable biggest participation in new agreement,” he told RTCC in an interview on Monday.

“I think that if we think about Paris confidence the outcome should not be judged whether this conference will deliver an outcome of avoiding 2C.”

The 2C warming figure is a sensitive subject at the UN. In 2010 nearly 200 governments formally agreed it was a warming ceiling they wanted to avoid.

Scientists say beyond that level the world could expect accelerated polar ice melt, rising sea levels along with more droughts and floods.

But the current rate of greenhouse gas cuts proposed by governments is way off that target, say analysts at the Climate Action Tracker team.

Many green groups and developing countries are demanding greater ambition on this front ahead of Paris, but this avoids the greater goal of Paris, said Korolec.

“When people in 2020, when they ask about new agreement they will ask if [it] creates a system of international cooperation which will enable us to reach the 2C goal,” he said.

“This is the most important point… how to mobilise the biggest number of countries to be part of effort – and then to have a dynamic agreement which will operate in cycles of 5 or 10 years which will lead us collectively to reach the goal.”

Korolec led the EU negotiating team in 2011 during the UN climate summit in Durban, where the blueprint for the Paris pact was formally accepted.

Between 2013 and 2014 he was president of the talks, running the UN conference in Warsaw and chairing smaller meetings between parties throughout the year.

He expects limited movement on slashing the 90-page UN negotiating text during a two week meeting in Bonn taking place now. Its vast length is a “natural way to protect interests” he said.

Where Korolec does see progress is on how the responsibilities of developed and developing countries to address climate change are defined before and after Paris.

It’s possibly the most toxic issue blighting these talks, but he said the concept of “self-differentiation” offers a solution to a long-running problem.

It relies, perhaps optimistically, on countries classed as developing in 1992 acknowledging their situation has changed in the past 23 years.

But supporters say it will move talks on from a situation which pits two groups defined as rich and poor against each other, into a more nuanced picture of how the world looks in 2015.

“The beauty of the concept is you are escaping from artificial divisions between countries,” he said.

“If you combine self-differentiation with concept of a dynamic agreement this is a way how we can create a system where this goal of 2C will be reachable.”

On EU leadership in Paris, Korolec is less forthcoming. The 28 member states are “united” ahead of the talks but need to avoid “mistakes of the past” he said.

These include the 2012 move to ratify a second commitment period of the Kyoto Protocol, taking the world’s only legally binding climate deal up to 2020, when the Paris pact will take over.

Korolec was at the centre of bitter intra-EU discussions leading up to the EU decision to back KP2, arguing it would penalise industries within the bloc if it made unilateral carbon cuts.

That debate spilled into talks in the EU’s 2030 climate strategy – which concluded with a goal to cut emissions 40% on 1990 levels by 2030 – and offered Poland significant financial help to decarbonise its economy.

Critics say work on that has been slow. The country relies on coal for 55% of its total primary energy consumption, and 75% for power generation.

“The strength of the coal industry, the local abundance of coal, and relative price of coal has contributed to Poland’s opposition to environmental measures proposed by the European Union,” the US Energy Information Administration said in a 2013 report.

Korolec is on record stating Poland will manage its energy transition at its own pace, and it’s one other European governments have had limited success in accelerating.

One thought is that new tighter controls over the EU’s carbon market (ETS) will penalise coal companies and encourage high polluters to clean up their act.

It’s not a line of argument that the Polish minister – famed for his tough negotiating style – buys into.

Once Poland was told it did not understand markets given its Communist past, he said. Now Brussels is trying to command the markets, leaving him “pessimistic” about the future of the ETS.

“With our attitude in ETS we do not have a market… we have a system that was designed to be a market but today we have a huge administrative intervention in this market,” he said.

“I think we created in Europe such big uncertainty from the point of view of investors that we will face tremendous problems because of that uncertainty. Who can testify that in 2025 there will be not be [another] market intervention?

“I don’t think it is a way to convince other big economies to follow the European example.”