Activists launch She’s Not A Fan campaign, say efforts to protect Indonesia’s forests are being obstructed by AAL 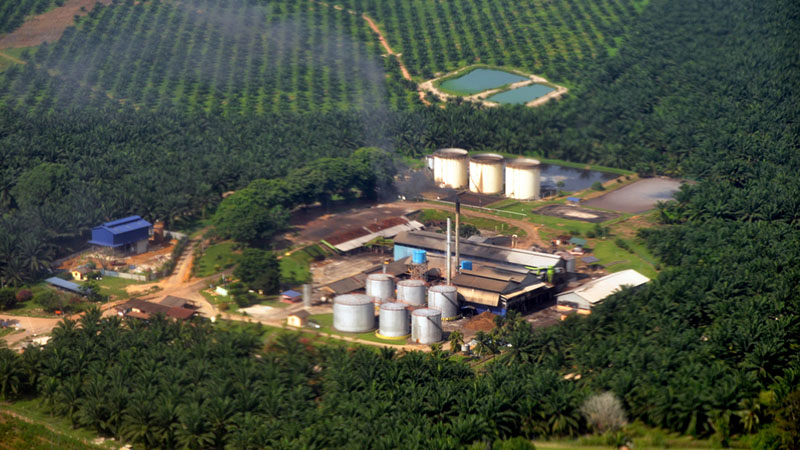 The luxury Mandarin Oriental hotel chain has been targeted by an international campaign to slow the rate of deforestation in Indonesia.

According to Forest Heroes, AAL plans to open a new palm oil mill in Aceh, Indonesia, risking thousands of hectares of rainforest, a charge the company denies.

Playing on the Mandarin Oriental celebrity “I’m a fan” slogan, campaigners have launched a “She’s not a fan” website to highlight the links the chain has to the destruction of habitats home to endangered elephants and tigers.

“Staying at the Mandarin Oriental sends profits to one of the most environmentally destructive corporations on the planet,” said Deborah Lapidus, director of the campaign.

Mandarin and Astra are owned by the Jardine Matheson conglomerate, one of the world’s largest companies, registered in Bermuda and listed on the London Stock Exchange. 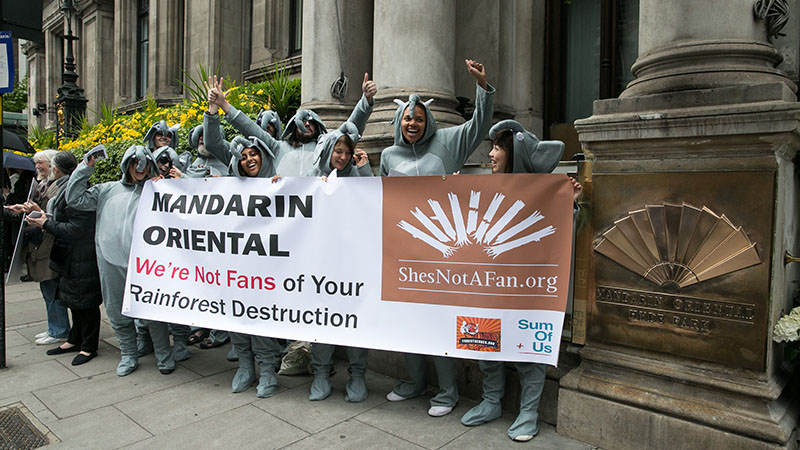 Protestors in London outside the Mandarin Oriental in Hyde Park, one of the chain’s top hotels (Pic: Forest Heroes)

According to the company’s annual accounts AAL generates around 3% of Jardine Matheson’s annual income. In 2014 its production of palm oil soared 21.1%.

In statement sent to RTCC Jardine Matheson said it believed AAL’s sustainability practices were “among the best in the industry” and said it was a supporter of the Indonesian Palm Oil Pledge (IPOP) initiative to curb deforestation.Palm oil is used in a huge variety of goods from lipstick, pizza dough to chocolate and detergent.

Leading producers in Thailand, Indonesia and Malaysia expect to produce nearly 62 million tonnes in 2015, a 4.3% rise on 2014, catering for rising demand in the EU, US, China and India.

Producers are frequently accused of clearing virgin forest, draining peat bogs and driving off local communities in their search for more land.

Globally deforestation and peat fires accounts for nearly 12% of greenhouse gas emissions, according to the UN’s Intergovernmental Panel on Climate Change.

Indonesia’s government has imposed a moratorium on forest clearances, a move supported by companies such as Asia Pulp and Paper, which was previously one of the worst forest destroyers.

Along with 27 other countries Indonesia also backed a 2014 pledge signed at UN Headquarters to halve forest loss by 2020 and end it by 2030.

Glenn Hurowitz, a forest expert at the Washington DC based Climate Advisors told RTCC there had been a “revolution” in breaking the links between agriculture and forest loss.

“In the last 18 months the overwhelming majority of palm oil has been covered by no deforestation policies,” he said.

But despite progress from the likes of Unilever and APP in signing up and implementing more stringent guidelines for palm oil, he said Indonesian efforts to protect their forests were at risk.

“In Indonesia the president has taken substantial action to protect forests… both APP and largest palm companies have announced and are implementing them,” he said.

“But we have been told that this company [AAL] is using influence amid palm oil association to undermine the new president’s efforts to conserve forests.”