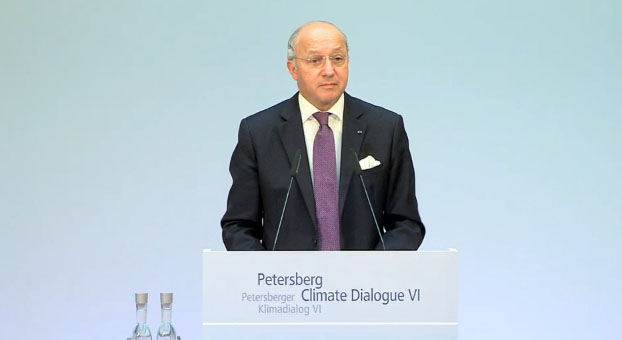 France’s foreign minister says more countries are coming out in support of a long term decarbonisation goal as part of a proposed UN climate pact later this year.

“I am encouraged that a growing number of countries wish to set long term collective objective of emission reductions for 2050,” Laurent Fabius said, addressing ministers and envoys from 35 countries at a two-day summit in Berlin.

Fabius will chair a UN summit in Paris this December, where plans for a global deal on climate are expected to be finalised by nearly 200 governments.

The Petersberg Climate Dialogue, launched by Angela Merkel in 2010, is one of a series of high level meetings to lay the groundwork for that meeting.

Merkel and France president Francois Hollande will attend the talks on Tuesday to offer their support for the process.

The goal of Paris would be to limit warming to between 1.5-2C above pre industrial levels, said Fabius, who said “nothing should be taken for granted” in the coming months.

German environment minister Barbara Hendricks offered her support for a a goal of carbon neutrality in the second half of the century, which scientists say is necessary if the world is to avoid dangerous warming.

“If we make this our joint objective it would send out a strong and important signal – the formulation should be based on long term considerations,” she said.

Calls to phase out fossil fuels before 2100 have strong support from many European, African and Pacific countries, but emerging economies are less keen on the idea, fearing it could restrict their economic growth.

Hendricks deflected demands from some developing countries that industrialised nations rapidly cut their use of coal, gas and oil, suggesting all could work together for a common goal.

“The question is not who has the right to use fossil fuels but how can we use technology to terminate the fossil fuel age,” she said.

So far 38 countries covering 30% of global emissions have submitted their intended carbon cutting contribution to the UN ahead of Paris.

Fabius said it was “essential” that all countries came forward before the start of October, when the UN will assess if reductions on offer are enough to prevent temperature rises above 2C.