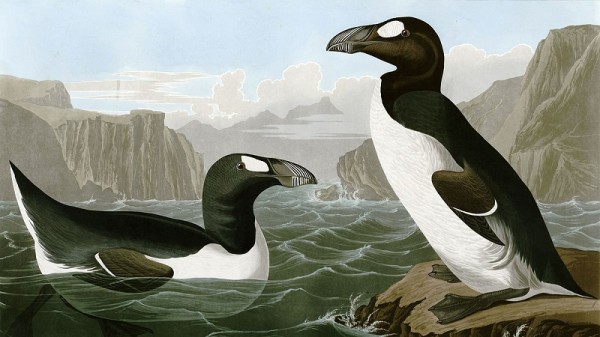 Remember the great auk? How about the quagga?

As many of 16% of world species could join history’s dead and gone if greenhouse gas emissions stay on their upward trajectory, a study predicted today.

Human-caused global warming would raise the proportion facing die-offs as habitats are destroyed and wildlife is dispersed as heatwaves, droughts and floods became more common.

The findings published in the journal Science underline the looming threat to conservation if the planet stays on track to warm 4.3C by 2100, in line with UN climate science bureau forecasts.

If countries curb heat-trapping gases and limit temperature rise to 2C as part of a UN-backed climate pact, they can keep that “global mean extinction rate” to 5.2%, according to Mark Urban at the University of Connecticut. In any case, that is expected to rise from today’s level of 2.8%.

“Extinction risks from climate change are expected not only to increase but to accelerate for every degree rise in global temperatures,” Urban, an associate professor in the Department of Ecology and Evolutionary Biology, said.

“The signal of climate change — induced extinctions will become increasingly apparent if we do not act now to limit future climate change.”

The study combined 131 published predictions for multiple species, where extinction rates varied between 0-54%, to form a global overview.

South America was the most endangered region with a 23% risk of extinction, followed by Australia and New Zealand with 14%. North America and Europe were lower at 5% and 6%.

Scientists have identified 1.4-1.8 million species on the planet, according to the World Wildlife Fund.

Some species naturally go extinct over time, known as the background extinction rate.

But human-induced environmental changes such as destruction of habitat, increased acidification of the oceans and rising temperatures have ramped up rates of extinction by 1,000-10,000 times over natural levels, WWF said.

“This fits with what WWF has been saying for some time – that climate change is the number one challenge to people and nature,” Mike Barrett, UK science director.

Last year, the Living Planet Index revealed populations of vertebrate species have halved since 1970, due in part to climate change.

The report comes in the wake of another in Nature Climate Change sharpening the link between human activity and extreme weather.

Researchers found that a global temperature climb of 0.85C since the Industrial revolution was responsible for 75% of daily heat extremes and 18% of unusual precipitation events like snowfall across land.

Scientists have speculated climate change could drive species as diverse as bees and koalas to extinction in coming years.

But Urban told RTCC his research showed the clear case for action in preserving biodiversity.

“We could control our greenhouse emissions and implement conservation strategies to protect the most threatened species,” he said.