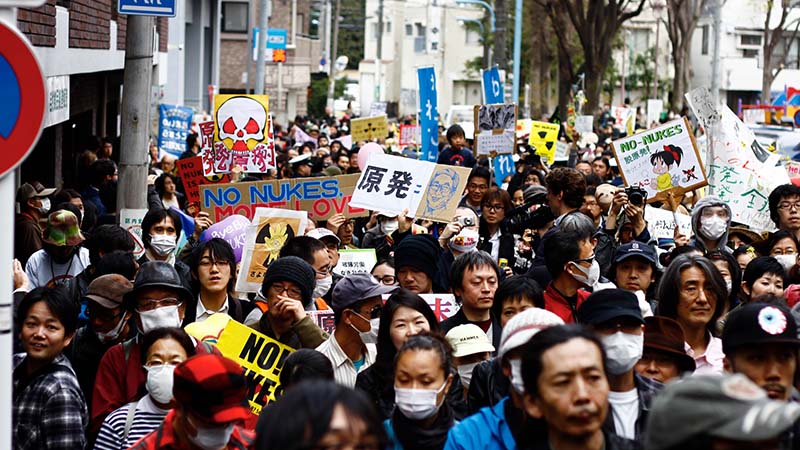 Fossil fuels will remain behind the bulk of Japan’s electricity generation by 2030, scaling back its carbon slashing ambitions as the future of nuclear power hangs in the balance.

Atomic energy is forecast to power 20-22% of the country’s electricity in 15 years, and clean energy as much as 24%, according to a draft report published today by the Ministry of Economy, Trade and Industry.

That ‘energy mix’ sets the terms for Japan’s anticipated pledge to cut emissions together with almost 200 nations ahead of a UN summit in December.

Last week local media reported its so-called intended nationally determined contribution (INDC) to take the form of a 25% cut from 2013 levels by 2030 — way behind the pack of industrialised countries. The US intends to reduce emissions of heat-trapping gases by 26-28% from 2005 levels by 2025, while the European Union is proposing at least a 40% cut from 1990 levels by 2030.

Japan’s former chief climate change negotiator, Mutsuyoshi Nishimura called the speculated INDC a “low figure for a country which has been working so hard in the international community to stop global warming.”

The trade ministry’s recommendations — to be discussed by a panel before a final decision is made in coming months — foresee a reduced long-term role for nuclear energy following the Fukushima disaster in March 2011.

Nuclear energy accounted for 28% before a tsunami lashed Japan’s coastline and caused a nuclear meltdown in three of the plant’s six reactors. That resulted in mass evacuations from fear of radiation exposure, and a global desertion of nuclear power.

Since September 2013 all reactors remain shut down. Now 24 of the 39 commercially-operable are under review by the Nuclear Regulation Authority, as Japan’s nuclear lobby spars with a deeply-opposed public to reopen plants to plug the country’s clean energy needs.

However a Greenpeace report published today casts doubt on the ministry’s 2030 projections, estimating nuclear’s stake would be just 6-7.9%, compared to the aim of 20-22%.

“[What] is all but certain is that the scale of the challenges facing Japan’s electric utilities is so enormous that the electricity share generated by nuclear power in 2030 will be significantly less than prior to to the 2011 Fukushima-Daiichi nuclear accident,” it said.

Government calculations show the country’s existing reactors can only meet 15% of future electricity generation, provided they operate for no more than 40 years in line with regulations. That implies construction of new plants –a prospect set to face opposition from the estimated 60% of Japan that is anti-nuclear according to opinion polls.

Deregulation of the electricity market, as consumers flock from the monopoly provider to new firms on lower prices, also would curtail nuclear’s appeal, Nishimura said.

And so ramping up renewables, such as solar and hydro-energy, were key.

But Nishimura described a “strange dichotomy” where the Japanese government was “reluctant in bringing RE (renewable energy) in any massive way for fear of them overtaking nuclear power.”

For long a climate leader and birthplace of the world’s only legally binding treaty to date, the Kyoto Protocol, the Fukushima disaster has knocked Japan’s clean energy pathway off course.

The figures come as Japan Prime Minister Shinzo Abe met with President Barack Obama on an official visit to the US.

Climate change, high on Obama’s agenda, was expected to be discussed an administration advisor told reporters on Friday.