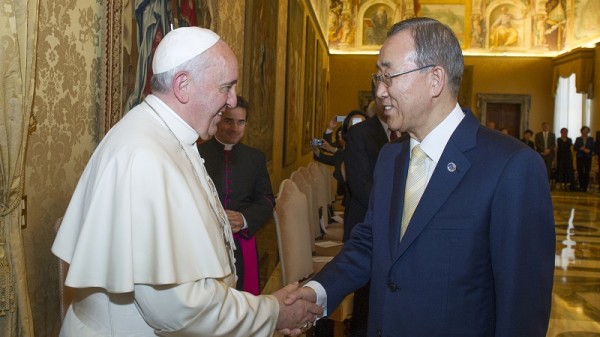 After a private meeting with Pope Francis, Ban told delegates: “Together, we must clearly communicate that the science of climate change is deep, sound and not in doubt.”

His remarks presented an oblique challenge to oil-funded US think-tank the Heartland Institute, which is urging Catholics to “rise up” against carbon-cutting policies.

The institute claimed: “Many people of faith… are worried this event will become a platform for alarmism over a controversial scientific issue.”

But Ban praised the pontiff’s moral leadership on tackling human-caused global warming to protect the most vulnerable members of society.

“We have a profound responsibility to the fragile web of life on this Earth, and to this generation and those that will follow,” said Ban.

“That is why it is so important that the world’s faith groups are clear on this issue – and in harmony with science.”

Pope Francis is preparing to release an encyclical on man’s relationship with nature in June or July.

This letter to the world’s 1.2 billion Catholics is expected to stress the need to care for God’s creation and protect the world’s poor.

“We need to see – with the eyes of faith – the beauty of God’s saving plan, the link between the natural environment and the dignity of the human person,” Pope Francis has said.

The Intergovernmental Panel on Climate Change warns that the world is on course for 4-5C of warming this century.

This would “alter life on Earth as we know it,” said Ban, and is “morally indefensible”.

Countries have agreed to try and limit temperature rise to 2C, by curbing greenhouse gas emissions responsible for climate change.

They are aiming to strike a global deal at UN talks in Paris this December.

Ban told the assembled Cardinals and delegates: “Citizens around the world are demanding an agreement and demanding action. I urge you to join them.

“Let the world know that there is no divide whatsoever between religion and science on the issue of climate change.”