Pope Francis’ desire to address global warming is undoubted, but Papal desire to curb poverty and protect creation not new 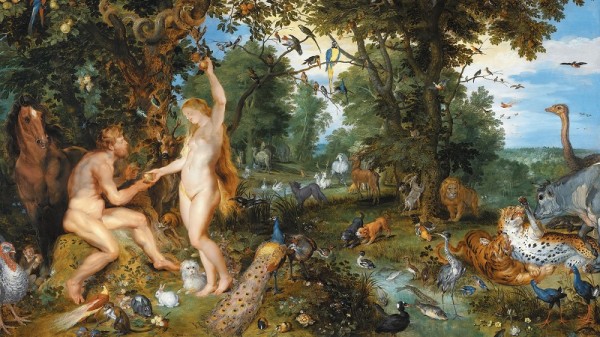 The Garden of Eden with the Fall of Man by Jan Brueghel the Elder and Pieter Paul Rubens (Pic: Wikimedia Commons/Jan Arkesteijn)

Environmental degradation is a sin. We are in an age of ecological crisis.

So argues Joshtrom Kureethadam, a Catholic priest and chair of philosophy of science at the Salesian Pontifical University in Rome, in his new book Creation in Crisis.

“The failure of Adam and Eve, while dwelling in the garden lovingly created for them, to respect a limit imposed on them regarding a tree in the same garden, shattered their relationship with the Creator,” he writes.

“Creating lunar landscapes of pollution and destruction, veiling the sun with industrial smoke, and filling the heavens with CFCs are offences to the Creator,” he adds.

For Kureethadam, the world faces a moral crisis, which manifests itself in ecological destruction and hits the most vulnerable in society: women, children, indigenous communities, the poor, future generations.

Only through “solidarity” between humans can this be fully addressed, he argues.

It means rich countries recognising their role in causing historical levels of greenhouse has emissions. It means each human having a right to “equal ecological space”.

And it requires a fundamental reworking of the global economy to close the gap between the world’s richest and poorest.

For some, these proposals will sound radical, out of a left wing climate justice playbook that despises capitalism. For others, they are just the start of what needs to be done.

But what’s clear from reading Kureethadam’s book is that they are firmly in line with church teaching, and in that sense they offer a frame to view an expected papal encyclical (letter to the faithful) on the environment.

A Vatican climate summit on Tuesday is expected offer delegates a glimpse of what this may contain. And given the Pope’s huge soft power, it’s likely to be analysed carefully around the world.

This will be a hugely significant political intervention in a year when the the UN plans to finalise global deals on climate change and sustainable development.

Due in June or July this year, the encyclical will followed by planned speeches from Pope Francis to the UN General Assembly and US Congress in September.

But as Kureethadam writes, the Vatican has banged on about the theme of poverty, solidarity among humans and the need for wealthy nations to help their poorer cousins for the past half century.

In 1961 Pope John XXIII, in his encyclical Mater et magistrate, decried the waste of “goods that other people need for their very lives”.

In 1987 Pope John II, in his encyclical Sollicitudo rei socialis, argued “we are all really responsible for all”.

In 2009, Pope Benedict, in the encyclical Caritas et veritate, said there was a requirement for “a sense of responsibility on the part of everyone with regard to everybody”.

And in 2013, speaking in the first mass of his pontificate, Pope Francis invoked the need to guard creation, and remember the poor.

Last month, a senior Vatican Cardinal helping Francis with his encyclical hinted these themes of safeguarding creation and respect for fellow humans are likely to be at the heart of its message.

What perhaps has changed is the noise from scientists, which ratcheted up a few notches in the aftermath of the UN climate science panel’s latest reports, released between 2013-2014.

These warned that if emissions continued at their current rate, the chances of limiting warming to “safe” levels would disappear within 30 years.

Even here, it’s worth observing the Vatican has followed the climate debate closely for the past 17 years, through its Pontifical Academy of Sciences.

In 1998 it hosted a meeting entitled Geosphere-Biosphere Interactions and Climate, in 2005 Water and the Environment, and in 2011 the Fate of Mountain Glaciers in the Anthropocene, involving a number of senior IPCC delegates.

What is new is the Pope’s determination to make climate change a headline issue – one he seems prepared to stake his legacy on.

It has rubbed some in Rome up the wrong way, seasoned Vatican observer Father Sean McDonagh told RTCC last week. “I expect he is not getting an easy ride on it,” he said.

US conservatives appear concerned, with good reason. Catholics make up a significant proportion of US lawmakers. While they may not obey every proclamation from the Vatican, they will feel obliged to listen.

This weekend the right-wing Heartland Institute, which has strong links to the fossil fuel industry, said it was sending emissaries to Rome to “warn Pope Francis” he was misled.

The signs are Heartland may be 50 years too late to stop the Vatican.

The environmental movement and Catholic church may not always see eye to eye – notably on population growth, not to mention contraception and HIV/AIDs.

But on climate change, poverty and a desire to reshape the global economy, they could find themselves allies.

“A return to the earth is at the core of a genuine ecological conversion,” writes Kureethadam.

“It is also important to recall here that Jesus’ own final commission to his disciples was to ‘go into all the world and proclaim the good news to the whole creation’.

“Our mission, our God-given great commission, includes the whole of creation, not just people.”