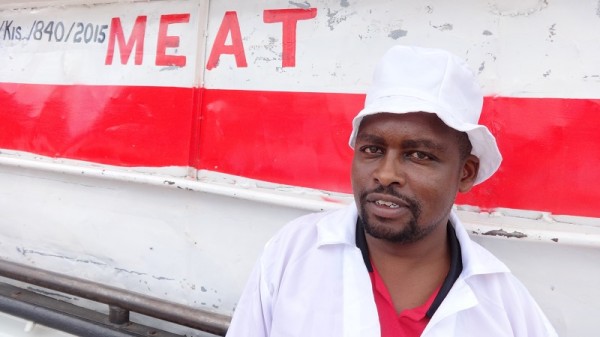 Isaac Nemuta next to a meat transport van in the slaughterhouse (Pic: Leo Barasi)

The Maasai people of East Africa have traditionally been livestock herders, but this way of life has come under growing threat.

While the rains in southern Kenya and northern Tanzania, where most Maasai live, have always been erratic, droughts have become more frequent in recent decades.

Climate change is expected to add more pressure to herders, as cattle are vulnerable to heat stress: a problem that is likely to become more acute as temperatures increase.

In the face of these challenges, a Maasai community is trying to improve its chances of survival with an innovative project that uses their cows to restore pastureland and generate extra income.

But questions have been raised about whether this project, and others like it, will be enough to allow the Maasai to maintain their traditional way of life.

“You can adapt to climate change over 10 to 20 years, but in the long term, certain livelihoods in certain places won’t be possible anymore”, climate adaptation expert Saleemul Huq told RTCC.

Studies find that rainfall in East Africa has declined over the last six decades, and local people are concerned that the problem is getting worse.

This year the long rains started several weeks later than usual, in mid-April, while both the short rains of 2013 and long rains of 2014 failed, leaving the region without rain for a year.

At the same time, average and extreme temperatures in the region are projected to increase due to climate change.

The changes to rainfall patterns are already making it increasingly difficult for the Maasai, and other pastoralists, to continue their traditional herding lifestyle.

To help pastoralists cope with these changes, a slaughterhouse in Kiserian, just outside Kenya’s capital, Nairobi, has pioneered innovative ways of using its waste.

The Keekonyokie Slaughterhouse provides a fifth of the capital’s meat, slaughtering around 150 cows on a busy day.

It has operated for over 30 years, but recently its owners became increasingly worried about the pressures facing local pastoralists.

“The Maasais are face-to-face with climate change”, said Michael Kibue, innovation manager at the slaughterhouse.

To help their 1,000 direct customers survive the changes to rainfall, the slaughterhouse introduced two innovations to change how it processed its waste. 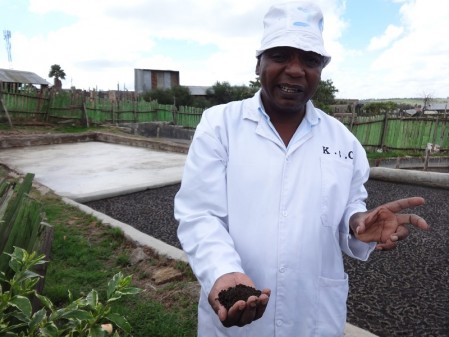 The first innovation helps pastoralists restore the grasses that feed their animals.

Until recently the slaughterhouse flushed its waste into a river, which ran on to a nearby town. “The smell was so bad it was even driving the dogs away”, said Kibue.

He realised that the waste could be put to better use and designed a system of channels and pits, which now processes the waste into a nitrogen-rich fertiliser.

The slaughterhouse encourages Maasai pastoralists to bring grass seeds along with their animals for slaughter.

The seeds, when coated with the fertiliser, grow faster, creating more food for the pastoralists’ animals. The better-fed livestock are better able to survive droughts and can be sold at a higher price.

As well as fertiliser, the waste produces biogas which the slaughterhouse now bottles and plans to sell to the community.

Preparing the gas for sale has been difficult, as methane is harder to compress safely than LPG, but Kibue says it is nearly ready for domestic use: “The cow is now not only a source of meat, it is also a source of energy.”

Since the biogas is generated from waste, the slaughterhouse will be able to sell it at half the price of conventional LPG, so cutting day-to-day costs for pastoralists, as well as reducing their need to spend time collecting firewood.

The fertiliser and biogas projects – together with the slaughterhouse’s emphasis on using all parts of the animal – increase the value of each animal. Selling cows, goats and sheep at a higher price can help pastoralists to build up the resources to get through droughts.

When the biogas is ready for commercial sale, Kibue hopes to produce 100 cylinders a day, which he estimates would be enough for up to 3,000 families.

He acknowledges that the Keekonyokie Slaughterhouse can only make a small difference in helping Maasai pastoralists across the region to carry on raising livestock.

He is optimistic, however, that the innovations he has developed can be taken up by other slaughterhouses: “These are practical solutions and I have been called by five counties who have visited this place.”

With replication in mind, he designed the biogas compressor using technology that he hopes will be affordable for other small-scale slaughterhouses.

But with the rains increasingly erratic, and temperatures projected to increase, will the help from projects like this be enough for the Maasai to be able to carry on raising cattle?

He suggests that projects like these can support the current generation of pastoralists, but in the longer term, more radical changes will be needed: “Their children won’t be doing what their parents are doing.”

Isaac Nemuta, a worker at the slaughterhouse, is more optimistic. While the changing rains are making survival harder for pastoralists, “they will be able to carry on for the next thirty to fifty years,” he says.

And climate projections suggest the long-term outlook might indeed be more positive for Maasai pastoralists.

By the end of the century, rainfall in East Africa is projected to increase, with “more intense wet seasons and less severe droughts”.

Oxfam International have suggested that these conditions could benefit pastoralists, although warns they will bring new challenges including flooding and more competition for land as increased rain improves conditions for agriculture.

With these long-term projections, the value of the Keekonyokie Slaughterhouse may be the potential it represents to help pastoralists survive for long enough to benefit from more favourable climate conditions.