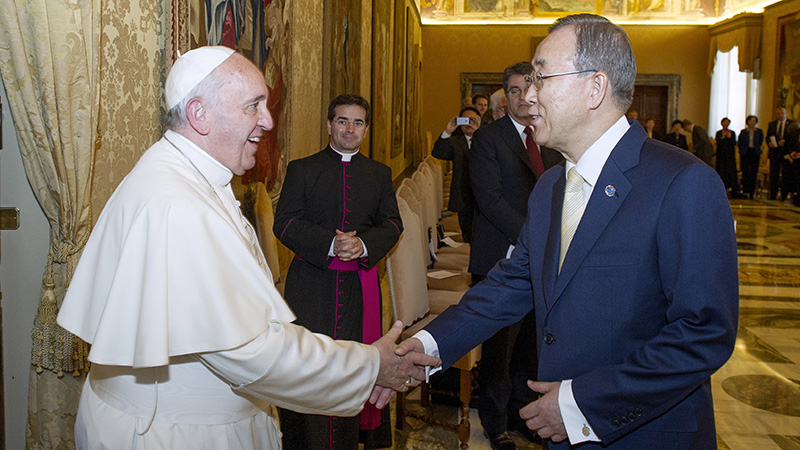 Ban Ki-moon is set to headline a one-day meeting on climate change and sustainable development hosted by the Vatican on April 28.

The UN secretary general will join top officials from the Catholic Church to discuss plans for a global pact to curb greenhouse gas emissions, before a private meeting with Pope Francis.

“There’s a strong moral dimension to this effort,” said Ban. “I think this should be first time for any secretary general to be invited by the pope.”

One of the goals of the event, which is entitled “Protect the Earth, Dignify Humanity” is to help build a movement “across all religions” for sustainable development and the climate.

It also aims to lay the foundations for Pope Francis’ encyclical on the environment, due in June, by focussing on the “moral dimensions” of addressing problems like climate change.

Since assuming office in 2013 Pope Francis has taken a hawkish stance on climate diplomacy, leading calls for a strong UN emissions cutting deal later this year in Paris.

This month he announced he would pray for the environment, “that people may learn to respect creation and care for it as a gift of God.”

Reports suggest the papal encyclical – a letter sent to Catholic churches around the world – will focus on the duty of Christians to care for creation and protect the most vulnerable.

Father Sean McDonagh, an Irish Columban who follows environmental developments in the Vatican, told RTCC the new focus on the climate marked a “very big change” for the leader of the church.

“I know people in the Vatican are not happy, I expect he is not getting an easy ride on it,” he said.

Top officials talking about climate science and offering their backing the findings of the UN’s Intergovernmental Panel on Climate Change (IPCC) could be critical he added, given continued levels of scepticism around the world.

The Pope is expected to address the UN and US Congress when he travels to New York and Washington in September.

Catholics make up 31% of US lawmakers on Capitol Hill, and include climate hawk and secretary of state John Kerry, along with climate sceptic and Republican house leader John Boehner.

President Obama has frequently invoked faith when talking about the need to address global warming, calling on citizens to protect “our God-given natural wonders” in his weekly address on Saturday.

Recent Yale University research indicates 64% of US Catholics are worried about global warming, and are more likely to support renewable energy investments than other Christians.