Twitter failing to bridge gap between climate activists and sceptics 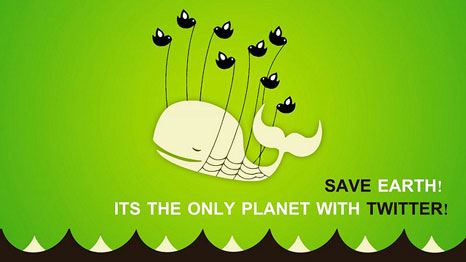 The new age of twitter and social media has failed to break down barriers between climate activists and climate sceptics – in fact it may just have made matters worse.

New research published in the journal Global Environmental Change shows both groups are ardent tweeters, but rarely follow what the others have to say.

And even the common use of hashtags like #climatechange doesn’t mean that rivals are soaking in different viewpoints.

Hywel Williams, a scientist at the University of Exeter, said he was “blown away” by the findings, based on analysis of 590,608 tweets from 179,180 users between January-May 2013.

“It’s about who interacts with who. There’s a sense there is a debate and that people are interacting across ideological divides – and it turns out it’s not like that,” he told RTCC.

Many users are simply “preaching to the choir” said Williams, who identified two clear if different sized “clusters” of tweeters using five hashtags chosen for the study: #globalwarming, #climatechange, #agw (an acronym for ‘‘anthropogenic global warming’’), #climate and #climaterealists.

“We find that most individuals engaged in online discussions are embedded within communities of like-minded users; such self-reinforcing ‘‘echo chambers’’ can prevent engagement with alternative viewpoints and promote extreme views,” the study said.

The findings have implications for campaign groups seeking to influence policy decisions via social media, suggesting simply tweeting slogans to followers who already agree could be a waste of time.

There is little middle ground in the climate debate on twitter, the study found. “You only do it if you have a strong opinion,” said Williams.

Tweeters with influence include scientists, bloggers, campaigners and a few journalists, but few managed to bridge the divide between those who back climate science and those who remain sceptical.

Analysis: How does the media frame climate science reports?

One of those was Richard Betts, head of climate impacts at the Met Office, who frequently interacts with all sides, and who last year took part in a controversial supper with some high profile climate sceptic bloggers.

That, said Williams, is an exception to what appears to be a wide divide, albeit one conducted on twitter, which according to a 2014 study by Pew Research is used by 23% of online adults.

“There are certain individuals or users, who are quite rare, who are the ones bridging the gap between different viewpoints,” he said.

“They have a very important role. If you really want to get your divestment campaign heard outside then maybe you have to try and engage with those who are different and outside your group.”

Another interesting finding was that tweeters with climate sceptic views are no more likely to post offensive comments than those who accept the basics of climate science.

Sceptics have long been accused of trolling, but Williams said the study indicated their minority status meant they were just more likely to interact with users they disagreed with.

“We found a lot of negativity, but when you crunch the numbers you find out they are no more likely to be negative than anyone else,” he said.

“There is a popular perception that sceptics must be irrational or unreasonable but this study doesn’t support that at all.”