Twitter adversaries meet over dinner to discuss the climate debate, and why everyone hates each other so much 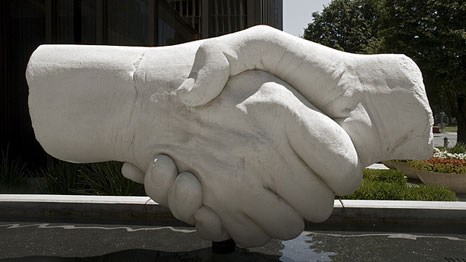 Twelve scientists and sceptics have met privately to discuss how to suck the venom out of the climate change debate.

It was one of science’s strangest social events to date.

Some of the best known names in the climate debate – including Mail on Sunday journalist David Rose, blogger Anthony Watts, and Met Office scientist Richard Betts – shared salmon and civilities at a dinner party last month.

Hosted by the sceptical scientist Nicholas Lewis at his house in Bath in September, the group discussed their similarities, differences, and how they might calm the debate that rages across the pathologically provocative medium of Twitter.

“Both sides are really fed up with the outrageous alarmists who are not representing science properly. Both don’t like those who shout about it and call people names and take a polarised point of view,” says David Whitehouse from the sceptic think-tank The Global Warming Policy Foundation.

The idea that there is some wiggle room when it comes to the facts of climate science is not always a popular one. The scientific consensus has already spelled out the catastrophic implications of delaying action on climate change, so fussing around uncertainties can be perceived as unhelpful.

Yet, when it comes to details, the scientists are as willing to admit it as the sceptics: the science is not settled – not fully – and the insults slung around online only hinder the process of rational scientific debate.

“When people say the science is settled, they mean there is such as thing as anthropogenic climate change. Where it’s not settled is the rate of change, how much it’s going to warm, how fast it’ll warm under different levels of CO2 and exactly how it will affect different regions,” says Ted Shepherd, a climate scientist at Reading University and Grantham Chair in Climate Science.

“It’s not like climate scientists agree on everything by any means, so there’s no reason sceptics can’t come into that discussion.” 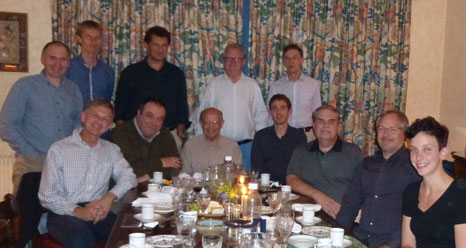 Often seen as bitter adversaries, the fact that such a group should be able to meet for civil conversation may seem remarkable.

The dinner was informal, but took place under Chatham House Rules, restricting how much information they could let leave the room. “Trust is precious – hard won, and easily lost,” said Tamsin Edwards, a climate scientist at Bristol University who maintains her own blog, and will publish her own account shortly.

Yet each participant to whom RTCC spoke stressed that the gulf between scientists and sceptics is not as wide as assumed – even on science.

“We found that we could all agree on many issues, but disagreed on several others,” said Ed Hawkins, a climate scientist at Reading University.

Even the global warming ‘pause’ – the 16 year period during which temperatures have remained fairly stable – was spoken about fairly calmly, says Whitehouse. “We talked about the pause and everybody accepted it was very interesting and needed more study.”

A survey of the table at the end of the meal revealed that the views of scientists and sceptics on the level of “transient climate response” – or how much the world would warm should levels of pre-industrial CO2 be doubled – differed only by around 0.4C, recounts journalist David Rose.

“This is a difference which does not justify the fear and loathing and vitriol that’s poured on so much of the debate,” he said.

Shepherd agreed that the difference was fairly small – and said even the sceptics’ lower estimates did not justify delaying action on climate change, as the current rate of emissions will still tip the world over the catastrophic warming threshold sooner or later.

“No matter what your view is, as long as you accept there is global warming, even if you take the best case scenario, you’re still going to take action at some point. That’s the sort of thing that was talked about a little bit.”

While the dinner may seem remarkable, what is even stranger is the fact that the debate has come to this in the first place.

These are not policymakers – and, if you take them at their word, neither the scientists nor the sceptics are politically motivated.

Dinnertime discussion did not centre on green taxes and solar subsidies, but data sets and temperature records.

The dinnertime was a communications exercise as much as a scientific one, providing an opportunity for the rivals to engage beyond the antagonistic Twittersphere.

“Communication isn’t one way, it’s two ways. You have to understand the audience and there’s no doubt that climate sceptics are part of my audience. And they think I’m part of their audience,” said the Met Office’s Richard Betts, a keen Twitter user.

He added that one of the criticisms that could be launched at his decision to meet with the sceptics was that it could be seen as condoning the more extreme views that he says they “let be taken seriously” on their blogs.

“As a scientist, I’m not trying to build anyone’s credibility. I’m just trying to discuss the science with all the stakeholders,” he said.

For the sceptics, the motivation for the meeting centered on shifting the perception of them as “denialists” to proficient scientists who can contribute to the debate.

All wanted to lay to rest the idea that they don’t believe in global warming – and are withering about those who promote this “loony” view. “I don’t know anybody who doesn’t agree that the world is warming and CO2 is a greenhouse gas,” says Whitehouse.

Salmon, vegetables and some apparently very good chocolates were not enough to convert anyone to the other side, but participants unanimously declared the evening a valuable exercise.

Above all, said Rose, it allowed the twelve people in the room to realise that their adversaries were people, not “demons”.

He said: “Just as it’s useful for people like me to see that so-called sceptics are not big oil funded deniers, it can be quite useful for sceptics to see that not all climate scientists are in a sort of conspiracy to bankrupt advanced economies.”

Will it change the tone of the debate? Everyone agreed that is an ongoing process.

Has it helped at all? The value of building a contact book when it comes to communicating climate science cannot be underestimated, they agree.

“It’s built a few personal bridges,” says Shepherd. “Now I have some contacts and if I did want to contact them because I didn’t like something they wrote in the newspaper, I could call them up and say I don’t agree that you’re providing a balanced view.”

The next stage would be a shared conference between sceptics and scientists, says Anthony Watts, who runs the blog Watts Up With That.

“We’ve been at odds so long, it is time to present science together,” he says.

Sceptics, who generally work outside of academic institutions, are rarely accepted to present papers at scientific conferences – though almost all attendees at the dinner party, and many other sceptics, are scientifically trained.

The exclusion festers, with many of them reading it as evidence of “establishment” hostility to divergent views.

But Shepherd says he is open to the idea of sceptics participating at conferences, if they have something valuable to contribute.

That inclusion could knock down the dividing wall between the two camps, he added, and subject the work to equal scrutiny to mainstream scientific papers.

“If sceptics want to contribute, they have to engage with the scientific community in the normal route, which is though climate conferences, giving presentations, writing papers and sending them to peer-reviewed journals,” he says.

The leap from a dinner table in Bath to the conference hall of the Royal Society may be difficult to scale – but don’t be surprised if you notice a few surprising words of warmth exchanged on Twitter between these twelve unlikely companions in the future.

Postscript: Since publication, there has been some disagreement among the guests on whether they ate salmon or beef at the dinner. We are awaiting reliable data records to resolve the controversy.