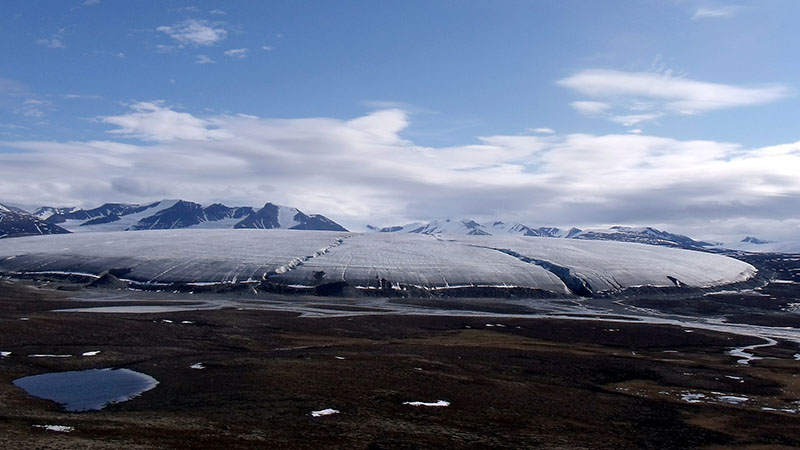 Three sets of scientists in the same week have helped narrow the uncertainties about how the natural world will respond to extra carbon dioxide in the atmosphere caused by the burning of fossil fuels.

Carbon locked in the frozen earth will escape gradually as the Arctic permafrost melts – but the scientists say the process could accelerate.

As greenhouse gas levels soar, and soils warm, and plant roots tap down into the carbon stored there by centuries of ancient growth, they will release potent chemicals that will accelerate microbial attack – and speed up the release of carbon dioxide into the atmosphere.

The soil carbon cycle is one of the great headaches of climate science. And the Arctic is the first place to look for answers about it, and about how the Earth and oceans that store atmospheric carbon will respond to global warming.

Around half of the world’s buried organic carbon is locked away in the soils of the northern circumpolar permafrost, and this huge vault of deep-frozen peat and leaf litter – more than 1,000 billion metric tonnes in the top three metres, at the latest estimate − contains twice as much carbon as is held in the atmosphere.

But the Arctic is the fastest-warming region on the planet, so what will happen as the permafrost thaws and plants begin to move north? Would it all be surrendered to the atmosphere in one devastating exhalation, triggering an explosion in global warming and causing trillions of dollars in economic damage?

An international team within the Permafrost Carbon Network thinks not. Their verdict, published in Nature journal, is that the current evidence suggests “a gradual and prolonged release of greenhouse gas emissions in a warming climate”. That is, humankind would have time to adapt.

“The data from our team’s syntheses don’t support the permafrost carbon bomb view,” says one of the team members, David McGuire, professor of landscape ecology at the University of Alaska Fairbanks.

“What our syntheses do show is that permafrost carbon is likely to be released in a gradual and prolonged manner, and that the rate of release through 2100 is likely to be of the same order as the current rate of tropical deforestation in terms of its effects on the carbon cycle.”

Since the tropical forests are already under pressure, this is hardly good news. And the picture is not a simple one.

As the permafrost thaws, the soil microbes will get to work on the buried carbon, which will inevitably add to the soil warming, and provide an instance of what engineers call positive feedback, according to a team led by Jøgen Hollesen, senior researcher at the University of Copenhagen’s Centre for Permafrost.

He and colleagues report in Nature Climate Change that when they measured heat production in 21 contrasting organic permafrost soils, they found it to be between 10 and 130 times higher than in mineral soils measured in Greenland − and this would have “crucial implications for the amounts of carbon being decomposed”.

And in the same issue of Nature Climate Change, a team led by researchers from Oregon State University have confirmed that any kind of warming or plant growth is likely to get the soil microbes working as hard as they can – partly because the plants use chemistry to free the soil carbon so the bacteria can start to turn it back into carbon dioxide.

Neither of the two Nature Climate Change studies was directly concerned with climate change. The Danish scientists’ findings sprang from concern about what warming might do to the ancient middens that hold as-yet-unexamined evidence of early human settlement in the Arctic. The Oregon team were more concerned about the interactions that go on in the soil, and how they could be measured.

They found that plant roots released an exudate that acted to release the chemical bonds that keep a carbon bound to non-organic minerals in the soil. Warming could only speed the process, so more carbon dioxide will get into the atmosphere from the soil because of global warming.

This, again, is positive feedback at work. And it suggests climate scientists might be underestimating carbon loss from the soil by as much as 1% a year.

“Our main concern is that this is an important mechanism, and we are not presently considering it in global models of carbon cycling,” says soil and environmental geochemist Markus Kleber, one of the authors of the Oregon report.

“There is more carbon stored in the soil, on a global scale, than in vegetation, or even in the atmosphere. Since this reservoir is so large, even small changes will have serious effects on carbon concentrations in the atmosphere, and by extension on climate.”