Renewable energy investments in developing countries are close to overtaking those in the developed world for the first time, research from the UN Environment Programme shows.

Of that, $139bn was directed towards industrialised countries and $131bn in emerging or developing economies.

China experienced a 39% surge from 2013, with one in every three dollars spent on renewables around the world invested in the country.

Among developed countries the US again led, solar driving 7% renewables growth with $36.3bn of new funds entering the market.

“The growing penetration of renewable generation in the world’s developing economies is one of the important and encouraging aspects of the 2014 report,” said Achim Steiner, Executive Director of UNEP. 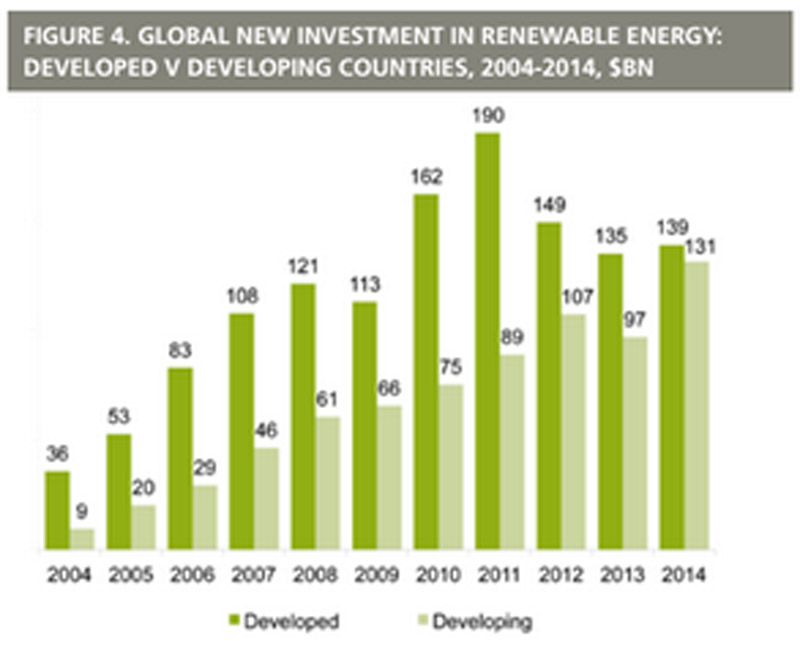 Produced annually, the 2015 UNEP Global Trends in Renewable Energy Investments highlights strong growth in wind and solar technologies, which in 2014 accounted for 92% of the investment in renewables.

Falling technology costs and increased evidence that renewables and efficiency measures are cutting greenhouse gas emissions is one reason behind new growth, the report says.

“A second is the fact that the battle to curb emissions is looking more and more urgent, as the world prepares for the Paris climate change conference in November-December 2015,” it adds.

The advent of Green Bonds, increased interest in the sector from fund managers, crowdfunding and “rising interest” from institutional investors like pension funds have also made attracting backing easier.

The study estimates that wind and solar, along with biomass and waste-to-power, geothermal, small hydro and marine power contributed 9.1% of the world’s electricity supply, up from 8.5% in 2013.

The largest growth in the solar sector was in China, with $40bn directed towards utility-scale 1 megawatt projects.

Japan came a close second with $34.8bn of new funding, mainly directed at small-scale solar projects of less than a megawatt.

In India the sector rebounded 14% with $7.4 billion of investment “as political uncertainty was alleviated” by the incoming Narendra Modi government.