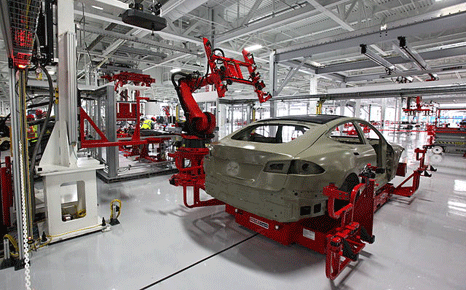 By Björn Nykvist and Måns Nilsson

The cost of batteries used in electric vehicles (EVs) has been falling fast and is almost certainly well below the estimates made by many analysts in the past decade.

EVs may be able to compete directly with petrol-driven cars on cost a lot sooner than most people think. Policy-makers, transport and energy planners, and investors should take note.

Opinion is divided about what role electric vehicles could play in a low-carbon future.

With no exhaust fumes and far greater efficiency at turning energy into kilometres, they certainly offer a lot of advantages over traditional petrol or diesel vehicles in a scenario of continued high private mobility.

But when last year, we studied the reasons why Sweden is lagging so far behind our Nordic neighbours in terms of EV take-up, we found a lot of scepticism about the potential of EVs.

Much of this scepticism was linked to a perception that they are too expensive to have major market impact, and are likely to remain for the foreseeable future.

As long as battery costs remain high, the manufacturers of electric vehicles have to make a trade-off between range (i.e. how far the vehicle can go before it needs recharging) and price.

This has been a major obstacle to increasing the market share of EVs, particularly outside the luxury niche they currently occupy.

However, in reviewing the available literature we found a puzzling gap between the very high battery cost estimates being used by many analysts and researchers – and influencing policies, plans and investment decisions – and signs that battery costs have been falling rapidly.

So we decided to investigate.

Cheaper than many think

The results of our study, published today in Nature Climate Change, confirm our initial impression.

We reviewed more than 80 different sources and found that in 2007, cost estimates for lithium-ion batteries for EV manufacturers were above US$1000 per kWh.

Seven years later, the battery cost for leading electric car models was around US$300 per kWh. This is particularly impressive, given that production and sales of EVs have only really started to pick up in the last couple of years.

If prices keep falling at this rate, we could be on course to reach US$150 per kWh – the price point around which some people believe EVs can become directly competitive with petrol-driven cars – in the next decade. 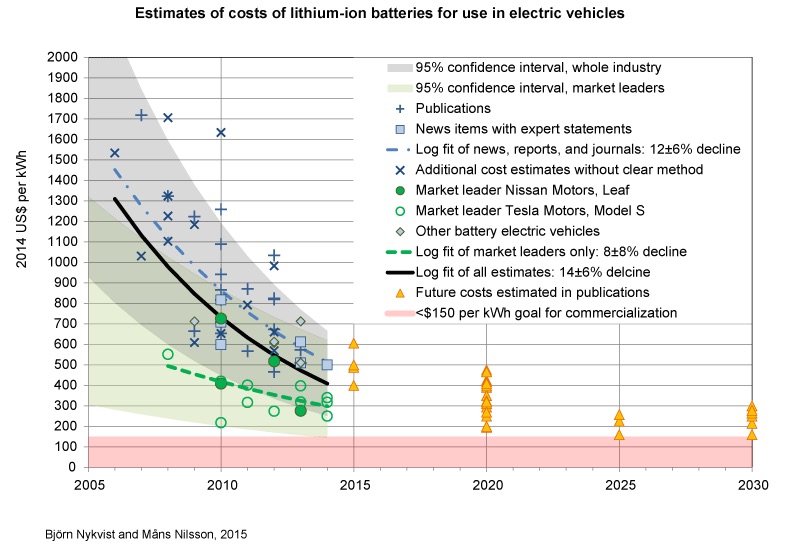 Although we didn’t investigate why battery costs are falling so fast, we can make some educated guesses.

Certainly technological learning has played a major role, as manufacturers have invested more in R&D on the chemistry of the battery cells and how best to combine them into battery packs designed for EVs.

Economies of scale will also have helped. We found that each doubling of production volumes correlated with a drop of between 6% and 9% in cost estimates.

And it’s quite possible that the earlier estimates, with little evidence to go on in terms of actual EV production, were overly pessimistic; thus the drop in actual costs might be not be quite as sharp as that in the estimates, though still real.

Analysts and policy-makers always seem to underestimate the pace of change in exponential growth paths.

We’ve seen it for years in solar cells, and now we’re seeing it in electric vehicles. Businesses on the other hand – some of them at least – have better foresight.

This fact is particularly important not just for investors but also for policy-makers and planners. A significant rise in the number of EVs on the roads could start to strain local power grids.

There is also the risk that battery-charging infrastructure will become a bottleneck to market expansion if planners are behind the curve.

At the same time, the continued shrinking of battery costs, and the future of EVs, still depend critically on demand-side policy.

Manufacturers have been willing and able invest more in R&D largely thanks to the major subsidy programmes to stimulate demand for EVs in countries like Norway, the Netherlands and the USA.

The prospects for EV development will be a lot more certain if other countries follow suit, enabling the industry to keep learning, and reducing costs as a result.

This is a good example of how working towards a more sustainable future often means not just acting on today’s risks and opportunities, but also taking a gamble on the technologies you believe could come to play a bigger role.

Our review suggests that for a little while more at least, countries will need to keep betting on EVs in order to keep them worth betting on.

Björn Nykvist is a research fellow at the Stockholm Environment Institute (SEI), in Stockholm. Måns Nilsson is deputy director and research director at SEI and a visiting professor in environmental strategies research at the Royal Institute of Technology (KTH) in Stockholm.