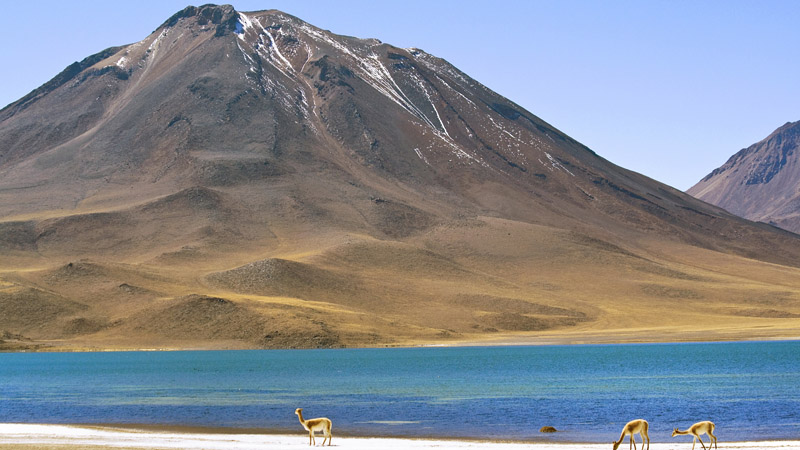 The Atacama desert region of northern Chile, one of the driest areas on Earth, has been hit in recent days by torrential rains and floods that have caused deaths, swept away homes and left much of the region without power.

Meanwhile, in the usually lush southern parts of the country, wildfires are raging across lands and forests parched by the longest period of drought in living memory, endangering some of the world’s richest flora and fauna.

“There have been whole species lost, such as the Araucaria araucana (monkey puzzle tree). They are trees that take hundreds of years to reach maturity, so this is a practically irreparable loss for current generations.”

The trees, a distant relative of the pine, are considered sacred by indigenous Mapuche people, and have been declared part of Chile’s unique natural heritage.

Scientists say the drought in the southern region – which is the powerhouse of Chile’s multi-billion dollar agricultural sector, and site of many of its famous vineyards – is a long-term trend, linked to climate change.

Chile’s president, Michelle Bachelet, says millions of dollars will have to be invested in desalination plants and new reservoirs to cope with the continuing drought. Canals and irrigation systems will also have to be upgraded.

“Faced with this critical situation,” he says, “there is no choice but to assume that the lack of water resources is a reality that is here to stay, and that puts at risk the development of important regions of the country.”

The Maipo river basin − which includes Santiago, Chile’s capital − contains nearly 40% of the country’s population and is an important area for agriculture, mining, and for power generation, much of which comes from hydroelectric sources.

Researchers, led by the Centre for Global Change at the Pontifical Catholic University of Chile, have been mapping the impact that climate change is likely to have on the Maipo basin.

Projections so far indicate that rainfall is likely to drop by 10% in the area over the period up to 2040, and by up to 30% by the end of the century. Meanwhile, temperatures will rise by 1C above the historical average over the next 25 years, and by between 2.5C and 3.5C by 2100.

The researchers have also been investigating glacier mass and melt in the Andes − the source of the bulk of the country’s water supply for millions of people in the region, and a crucial power source.

Scientists say that accelerated melting of Andean glaciers is being caused by atmospheric warming.

Water shortages are hitting not only the agricultural sector, but also mining – one of Chile’s major industries. The country is the world’s biggest producer of copper, and mining companies say they are having to invest in costly desalination plants in order to get water for processing copper concentrate from milled rock.

A drop in river levels feeding hydroelectric facilities is also leading to an increase in coal-fired power plants – a major source of climate-changing greenhouse gases.

Despite the recent rains in the north of the country, scientists are warning of the dangers of desertification in the region, with the northern desert advancing further south each year.