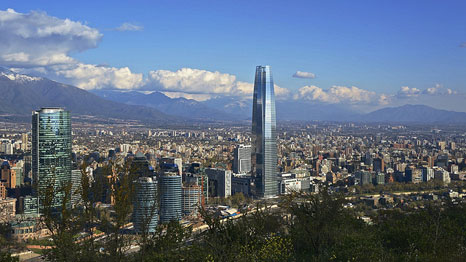 Chile is set to approve a carbon tax next week, making it the second country after Mexico in Latin America to put a price on polluting.

The carbon tax will go before the House of Representatives in the first week of September, as part of a broader package of tax reforms.

If approved, Chile will start charging US$5 per tonne of CO2 from 2017, around $2 more than in Mexico.

“Chile is not a great contributor to greenhouse gas emissions, but we are very vulnerable. It is in our national interests to see significant commitments in terms of climate change,” said Gariazzo Rodrigo Pizarro, head of the division of environmental economics in the Chilean government.

He added: “It is quite a significant tax for the Chilean economy.”

The package includes other environmental taxes intended to drive down air pollution and tackle climate change.

Pollutants including particulate matter, nitrogen oxides and sulphur dioxide will also be taxed, and there will be a levy on imported vehicles.

The measures are part of a broader series of reforms introduced by Chile’s new Socialist government, aimed at increasing taxes for big businesses and lowering them for individuals.

Most of the funds raised by the new taxes are likely to be channeled towards Chile’s sweeping education reforms.

The government hopes the additional financial burden of using fossil fuels will encourage greater investment in renewable sources of energy.

“We believe that changing the price allocation through taxes is enough to generate a greener economy,” said Pizarro.

Chile has large potential for solar and wind energy, with vast deserts and 6,400km of coastline. Yet the country still imports around 70% of its domestic energy supply.

Chile has voluntarily committed to reduce its greenhouse gas emissions 20% by 2020 based on 2007 levels.

In May, the tax reform bill was passed by Chile’s House of Representatives. It was then passed to the Senate, where minor changes were made, including extending the tax to all vehicles, rather than just those powered by diesel.

Whether the law is passed depends on these changes being approved once passed back to the House.

Latin America has seen a flurry of climate legislation in recent years. As well as implementing a carbon tax, Mexico passed a landmark climate change law in 2012. Colombia has announced that it intends to draft its own law by November.

Chile’s new carbon tax is to remain stable throughout the current administration. But the next government could extend measures, said Pizarro, for example by introducing a voluntary trading system or ramping up the price.