Toxic Delhi: Earth’s most polluted city has no plan to cut emissions 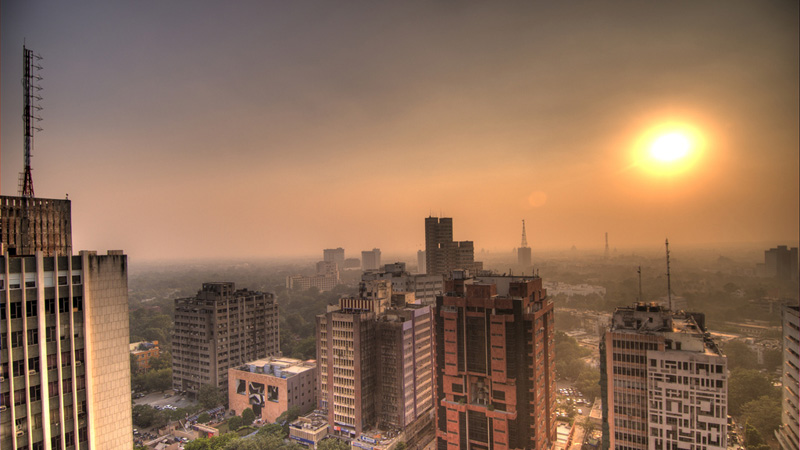 A recent joint study by universities of Chicago, Yale and Harvard found that half of India’s population may be losing up to three years’ lifespan because of bad air.

New Delhi is now ranked as the most polluted city on earth where air pollution may be 60 times higher than what is considered safe. In fact, if we are to trust the World Health Organization, 13 of the world’s dirtiest 20 cities are now in India.

The level of particulate matter (PM10), which can cause serious health problems, has exceeded prescribed limits over Delhi and five neighbouring cities, including Faridabad, Ghaziabad, Noida, Meerut and Alwar, Minister for Environment, Forests and Climate Change Prakash Javadekar admitted in Parliament this week.

“We have asked the Delhi government to come up with an action implementation plan by March 31. We have fixed timelines for these programmes. We want to take up all the 66 cities, state capitals and million-plus cities for maintaining air quality”, said Mr Javadekar.

Responding to that Delhi’s Chief Minister Arvind Kejriwal has asked his bureaucrats to come up with “offbeat solutions that could be implemented” in addressing the dangerous levels of air pollution in the city.

A minister in Kejriwal’s government, Satyendra Jain, said that “in Delhi, 78% of pollution is caused by vehicles, out of which, 38% pollution is due to dust”. He ‘promised’ to launch a campaign. But there has not been anything concrete on the ground.

Various studies show that an average day in Delhi would be considered a very bad-air day in Beijing.

Available data on PM 2.5 levels from the Delhi Pollution Control Committee’s monitoring stations shows, in 2014, Delhi had several days with poor air quality compared to that of Beijing. Also, unlike China, India has no emergency action plan to tackle heavy pollution episodes.

Recently, in the air-quality monitoring survey carried out by Greenpeace India inside five prominent schools across Delhi, it was found that the PM2.5 levels were four times the Indian safety limits and 10 times that of the World Health Organization’s.

“The government needs to acknowledge the severity of air pollution in the city and its corresponding health impacts. Our monitoring results, though conducted towards the end of winter revealed very high levels of particulate pollution inside the school premises, and in peak winter these numbers could only be worse,” said Aishwarya Madineni, campaigner with Greenpeace India.

It is appalling to see that there are no health advisory measures in place for Delhiites on heavy pollution days.”

The same environment minister had last month slammed the report by Greenpeace India and WHO, saying “the air quality in the national capital is far better than that in Beijing”.

A study released by the Jawaharlal Nehru University (JNU) last year reiterated the fact that Delhi’s air is full of cancer-causing particles and that exposure to particulate matter can lead to more than 47,000 premature deaths per million population within the city.

JNU’s Department of Environmental Sciences has come out with a toxicological risk assessment report that points out alarming levels of aerosol and heavy metals in the city’s air.

The findings of the report have also perturbed city’s environmentalists. “We know that particulate matter level is high in Delhi’s air, but the high presence of heavy metals in shocking.

The findings show how toxic can particulate matters be when it mixes with other compounds in the air,” said Anumita Roy Chowdhury, executive director, research and advocacy, Centre for Science and Environment.

In another event, serious concern was raised this week in Rajya Sabha (Upper House of Indian Parliament) over the rising air pollution in Delhi, with Sanjay Singh, a Congress member, saying that “many countries have reduced the tenure of their diplomats here due to the problem”.

The US, Germany and Japan have even reduced the tenure of their diplomats in Delhi from three years to two years. Many embassies have installed air purifiers in their offices and residences of their diplomats to monitor air quality.

Delhi could look to Beijing for lessons on tackling air pollution. Once known as the world’s most polluted city, Beijing shed the dubious tag by showing political resolve and implementing innovative measures to provide its citizens cleaner air to breathe.

“In a span of less than eight years Beijing reduced its air pollution by about four per cent, reversing the trend of deteriorating air quality in the city”, said Li Kunsheng, director of Emission Management Unit of Beijing Municipal Environmental Protection Unit.

He was speaking at a conference on short-lived climate pollutants organised by Centre for Science and Environment in Delhi.

As air pollution levels were high, the Beijing administration adopted a multi-pronged strategy from introducing cleaner fuel to phasing out older vehicles to putting restrictions on buying new vehicles and incentives for adopting electric vehicles.

Phasing out a personal car every day, the city capped the number of vehicles at six million, Mr Kunsheng said, adding Euro-V compliant fuel was introduced in 2013 to reduce toxic pollutants.

In comparison, there are over seven million vehicles in Delhi and introducing Euro-V will take another eight years, by which time vehicles in Beijing will be running on Euro-VII.

Mr Kunsheng said six ring roads have been built around Beijing — Delhi has only two — for the smooth passage of vehicles.

Only least polluting vehicles are allowed in the inner-most ring roads. On heavy air pollution days, the city administration issues advisories to citizens and clamps down on industries and vehicle movement. People are advised to take public transport.

“The hike in Respirable Suspended Particulate Matter levels beyond the National Ambient Air Quality Standards in Delhi is critical. The dramatic increase in PM10 levels in the last decade is a very serious sector which needs prime attention. If this is the condition for PM10 then one would shudder to think about PM2.5”, said Dipanjan Ghosh of Department of Atmospheric Sciences at University of Calcutta.

According to a report published at Times of India, “foul air may be causing cases of depression” too driving people to commit suicides.