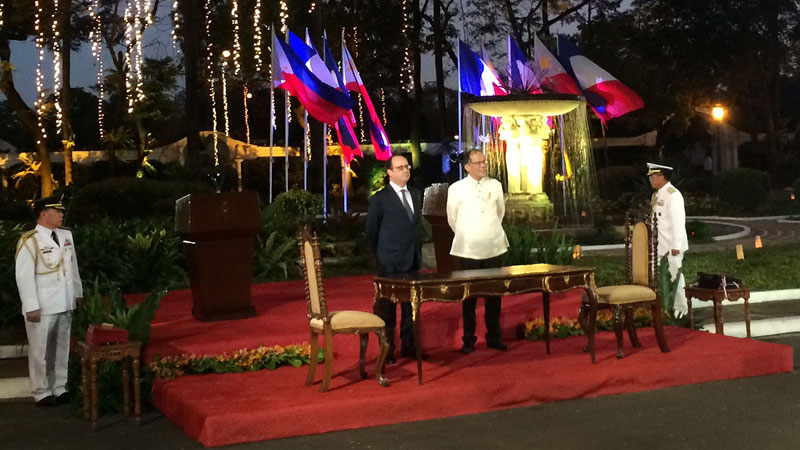 Hollande and Aquino launched the declaration outside in the Philippines (Pic: UNEP)

France and the Philippines have launched a joint call for a “universal, equitable and ambitious climate deal” this year in Paris.

All countries, from the poorest to the wealthiest, will come together in Paris in December under the UN to sign a global binding climate agreement.

As president of the proceedings, France is now leading the diplomatic push to make sure the meeting is a success.

During a two day trip to the Philippines, President Francois Hollande met with Filipino president Benigno Aquino to release the Manila Call to Action on Climate Change.

“From Manila today, we hope to make history in Paris in December and not simply watch history unfold,” reads the declaration.

“As we meet in the Philippines, where people have endured an unprecedented series of extreme weather events in the last few years, we are reminded while the developing countries have contributed least to climate change, we are the ones that suffer the most from the impacts of climate change.”

More than 6,000 people died in the Philippines in 2013 when Typhoon Haiyan made landfall. With the country still in the midst of recovery efforts, President Hollande will tomorrow visit the stricken town of Guiuan, where he will announce further rehabilitation actions.

His high profile delegation – including French foreign minister Laurent Fabius and Oscar-winning actors Jeremy Irons and Marion Cotillard – is an attempt to focus attention on the issue of climate change.

Standing alongside Aquino, Hollande explained that the purpose of the Manila Call was to mobilise public opinion ahead of the UN negotiations.

“We will need to have discussions with world leaders so the necessary commitments are made,” he said. “We will also need public opinion to mobilise, and that is the purpose of this appeal.”

Hollande added that the joint declaration was an appeal for “justice”, recognising that climate change is an issue that hits the poor hardest – despite the fact that it is the activities of rich countries that have been historically responsible for causing the problem.

He highlighted that the Green Climate Fund – which seeks to channel billions in clean energy investments towards developing countries – was key to these efforts. France has so far been one of the most generous donors to this UN-backed bank.

Reiterating his message to business leaders earlier in the day, Hollande said that the appeal was also for imagination and innovation when it came to creating a model for new finance and green growth.

Touching on the topic of terrorism, which has been another priority for France since the Charlie Hebdo attacks in Paris in January, Hollande said in a press conference ahead of the launch that the two issues were connected.

“Wars are sometimes the result of climate change,” he said, as they can cause poverty and displacement of people.

President Aquino also focused on the responsibility of all countries to act in the face of climate change.

“This statement, thus, is a welcome call to action: no longer can we be paralyzed by debates over the obligations of individual countries; all of us must do everything we can, in the quickest and most impactful way possible,” he said.

“The choice before us is clear. We can either overcome this problem together, or together reap the consequences of apathy.”