India is already moving on clean energy, says minister, but does not want outsiders reviewing its climate strategy 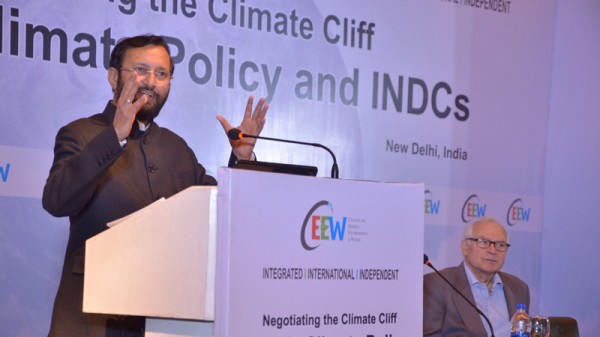 Prakash Javadekar says there is no need for the international community to review India’s climate plan (Pic: Council on Energy, Environment and Water)

The government is “optimistic” about achieving a target to install 100GW of solar by 2020 and could go further with more finance and technology support.

Yet Javadekar made clear India would resist any outside scrutiny of its plans, in defiance of European calls for transparency.

“There is no question of an ex-ante review in an independent country and democratic country like India,” Javedekar said at a conference in New Delhi.

He was speaking about the road to a UN summit in Paris this December, where world leaders hope to strike a global climate deal.

Developed countries are expected to reveal by the end of March their draft contributions towards the international effort to limit dangerous warming. These will focus on cutting greenhouse gas emissions.

“Since the last half century, emissions across the world have only been increasing. The developing world is now asking the developed world if they will vacate carbon space,” said Javadekar.

India is among a number of developing countries also promising to publish a climate plan.

While the government has yet to say when the plan will appear, Javadekar said “we have already started implementing some of the actions that will form the core of India’s contributions”.

Citing the solar target, he added: “We are committed to make our earth liveable and business doable, where every citizen will have access to fresh air and water.”

As a country in which 300 million people do not have access to electricity, cutting emissions is not top priority for India.

More important is mobilising technology and finance, as well as adapting to the rising sea levels and weather extremes that are already affecting its billion-strong population.

Susheel Kumar, a top official and climate negotiator, said the government was striving for a “comprehensive and transparent” national climate strategy.

That would be based on consultation with civil society in India, he said. “There is no room for international intervention.”

The European Union, in particular, had been pushing for a formal process to review countries’ contributions to a deal ahead of Paris.

It did not get agreement for that approach at the last round of UN talks in Lima. But think-tanks and NGOs are lining up to assess countries’ plans.

Sudhir Sharma, advisor for Climate Action Network South Asia, said: “Setting a target doesn’t automatically lead to achieving it and we still need to have intense engagement with the government and encourage it to put in place the required framework to facilitate investment so that the target becomes reality.”

The draft plan is “an important opportunity for India to showcase its climate leadership,” said Arunabha Ghosh, chief executive of conference organisers the Council on Energy, Environment and Water.

Sudatta Ray of CEEW added: “Highly vulnerable countries like India need to press major emitters to increase their mitigation targets, and increase their ambition to reduce the vulnerability of its own population.”