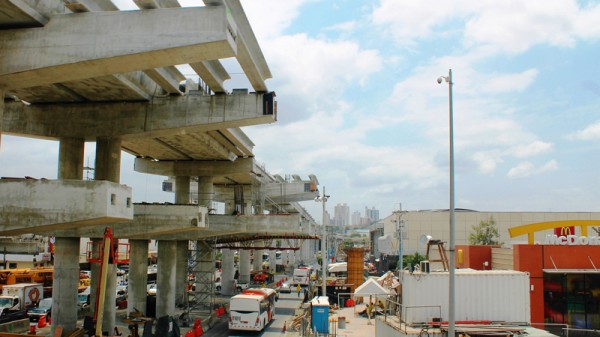 Citi raised US$862 million to fund the Panama Metro, which will cut car traffic (Pic: Flickr/gil2594)

Citi has doubled its commitment to climate finance after meeting a previous goal three years early.

America’s third largest bank aims to channel US$100 billion into low carbon initiatives over the next 10 years, while cutting its own emissions.

It has already lent, invested and facilitated more than US$50 billion in climate friendly sectors since 2007.

“These efforts do not constitute philanthropy, nor do they represent costs,” said chief executive Michael Corbat, as he announced the move.

“In fact, they reduce costs—and also increase revenues, enhance client relationships, and help manage risk. In other words, these efforts are integral to Citi’s business strategy.”

It is “a great example of how carbon reduction and economic growth can go hand-in-hand,” he said. “Policy alone can’t solve our climate challenges. It’s going to require business leadership and private capital – and Citi’s commitment offers both.”

Bank of America made a similar commitment worth US$50 billion in 2012, after reaching an earlier US$20 billion target four years ahead of schedule.

It followed that up at last September’s UN climate summit in New York with US$10 billion initiative to catalyse finance in clean energy projects investors would otherwise consider too risky.

Comment: With $10bn banked, what next for the Green Climate Fund?

Citi staff will have to be “much more active” in finding climate friendly projects, Amal-Lee Amin, climate finance expert at think-tank E3G, told RTCC. “It does represent good leadership in the sector.”

But commercial banking strategies are no substitute for public finance to help the world’s poorest respond to climate change, she stressed.

Governments have mustered US$10 billion for the UN-backed Green Climate Fund (GCF), to be distributed in developing countries over the next four years.

Half the money is earmarked for efforts to help communities adapt to the impacts of climate change. The other half will go to curb greenhouse gas emissions.

The idea is to target projects that may not be commercially attractive, to remove barriers and generate the confidence for private investors to join in.

Developed countries have promised to mobilise US$100 billion a year by 2020, some of which will come from leveraging the private sector.

It is not yet clear what will count towards that total, Amin said. “If it [private money] is genuinely mobilised by public finance, you need to be able to count it.”

The GCF board is due to set out its vision of the impact such funds can have shortly, ahead of a meeting next month.