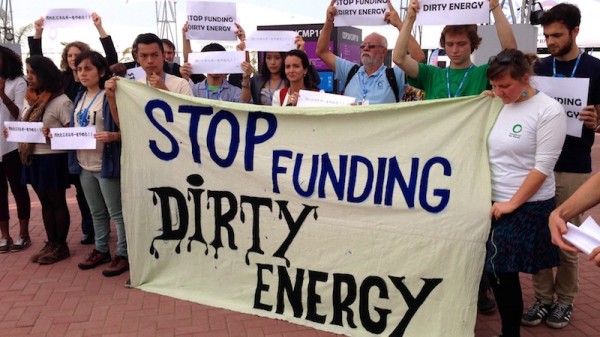 The UN’s green bank will start converting its $9.7 billion purse into real projects by June 2015, it announced today.

The Green Climate Fund, which will channel much of the $100 billion in climate finance that rich countries have promised to deliver every year from 2020, will start considering proposals for projects within the next sixth months.

The bank has agreed to split its funding equally between emissions reduction and adaptation projects, meaning that they money will help the world’s poorest countries turn to renewable energy and prepare for the worst impacts of climate change.

Tao Wang, director of mitigation and adaptation at the Green Climate Fund, said that the board wanted to accredit the bodies who would be able to put forward by their first meeting in March next year, so that they could start to develop their proposals.

“By June, we aim to have a number of funding proposals that will be submitted and ready for consideration,” he said, speaking at a side event at the UN climate talks in Lima today.

“The Fund is fast moving into operation and next year will be a year of delivery.”

Elina Bardram, chief negotiator for the EU, said that it was “encouraging” to hear that the Green Climate Fund is on track to receive proposals by the first half of 2015.

Having a pipeline of projects that are ready to be constructed in poor countries could be an important political signal ahead of UN climate talks in Paris next year, where a global deal to reduce CO2 emissions is expected to be signed.

Without financial aid and other types of administrative support from rich countries, many nations in the global south will struggle to adopt renewable technology and deal with the worsening impacts of climate change, including floods, droughts and rising sea levels.

But, she added, “we have our work cut out here in Lima” to make sure that the Green Climate Fund is financing the right kind of projects.

It emerged this week that Japan had used $1billion earmarked for climate projects to fund three coal power stations in Indonesia.

Its excuse was that the coal plants used “clean” technology, and therefore reduced emissions as it prevented a dirtier plant being built in its place. There were no restrictions in place to prevent Japan using its climate finance contribution for this kind of project.

The Green Climate Fund is a new pool of money that will be guided by a different set of rules, but these do not explicitly exclude fossil fuel projects.

This highlights the importance of establishing a robust set of guidelines to ensure that the billions collected by the GCF are channeled into the right kind of projects, says Brandon Wu, a climate finance analyst at Action Aid.

“Technically Japan has not broken any rules, and that means the rules are broken,” he said. “The Green Climate Fund cannot afford this kind of controversy. It’s leading some to question the very legitimacy of climate finance, which is very problematic for us.”

Countries will consider the Green Climate Fund in Lima this Saturday. As a body backed by the UN, parties must provide guidance on how they think it should work—including whether or not it should exclude certain projects.

“It could in theory say ‘Don’t fund coal power plants,’ but only if a party finds it important enough,” said Jan Kowalzig, a climate change advisor at Oxfam Germany, adding that both France and Germany have both expressed previous interest in having an exclusion list.

There is also pressure from NGOs. Around 330 organisations from around the world, including Greenpeace, Oxfam and WWF, wrote to the board of the Green Climate Fund today asking for assurance that it would not spend its money on coal.

“For the Green Climate Fund to have transformational impact, it should not promote ‘business as usual’ energy solutions in the name of providing energy access for all – an important goal that can and must be met through clean energy solutions,” they wrote.