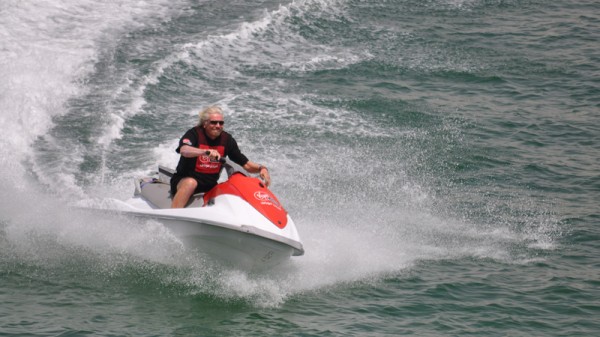 Countries should agree to aim for zero net emissions by 2050 when they sign a global climate deal in Paris this December, the “B Team” argued.

Ahead of interim talks in Geneva next week, they wrote to UN climate chief Christiana Figueres, saying the target was necessary to avoid “catastrophic impacts” of climate change.

“Setting a net-zero GHG emissions target by 2050 will drive innovation, grow jobs, build prosperity and secure a better world for what will soon be 9 billion people. Why would we wait any longer to do that?”

The Virgin boss has long been an advocate of climate action, although as author and activist Naomi Klein pointed out in her latest book, his 2006 promise to invest US$3 billion in low carbon technology has yet to materialise.

A commitment to net zero emissions would mean eliminating nearly all use of fossil fuels for energy.

Any emissions that could not be cut would have to be offset with large scale forest planting or as yet unproven technology to suck carbon dioxide out of the air.

Advocacy group Track 0 released a report to coincide with the letter, setting out the business case for a long term decarbonisation goal.

“Embracing the long-term goal for net zero emissions by mid-century provides predictability in the face of risk and complexity,” said Farhana Yamin, founder and CEO of Track 0.

“It defines the pathway to the low-carbon economy, providing clear direction for the near term actions of business – and all sectors – to meet the globally agreed 2C temperature rise limit agreed by the international community.”

“The necessary technology for sustainable development must be an available and affordable option for all countries,” she said.

“Without this, developing countries will have no alternative to dirty energy for their development, locking themselves into fossil fuel infrastructure for the long term, and we will fail to secure a safe climate future.

“But, if we succeed, we will do much more than stabilize the climate – we can unleash sustainable energy for all, put an end to poverty, improve global health and create a more prosperous world for our children, and grandchildren.”

Read the full letter below.

Today, as global business leaders and members of the B Team, we are calling on governments and businesses to commit to bold action at this year’s COP21 negotiations in Paris.

Our ambition – a global goal of net-zero greenhouse-gas (GHG) emissions by 2050 – builds on recent talks at the COP20 climate summit in Lima, and is grounded on an assessment of the latest scientific research, business risks and the economic costs of failing to keep within the 2°C threshold.

As you enter into a critical week of discussions in Geneva, we ask that you communicate this goal to the government representatives who will be negotiating on behalf of the citizens of the world, and that you make every effort to ensure this goal becomes the foundation upon which countries build the text of the final agreement.

The recent Intergovernmental Panel on Climate Change (IPCC) assessment concluded that achieving net-zero GHG emissions by 2100 will provide only a 66% chance of limiting global warming to 2ºC. We believe that a 1-in-3 chance of failure is unacceptable, given the potential for catastrophic climate impacts. Acting decisively and immediately, with a clear target of net-zero GHG emission by 2050, is the only way we can lower this risk and avoid ballooning costs.

Therefore we are calling for action in the following areas to achieve this:

In conclusion, we believe that a global commitment to net-zero greenhouse-gas emissions by 2050 is what the world needs to avoid catastrophic impacts of climate change and is what governments, businesses, investors and communities need to plan and invest for the future.

Respectively signed by the following B Team Leaders: