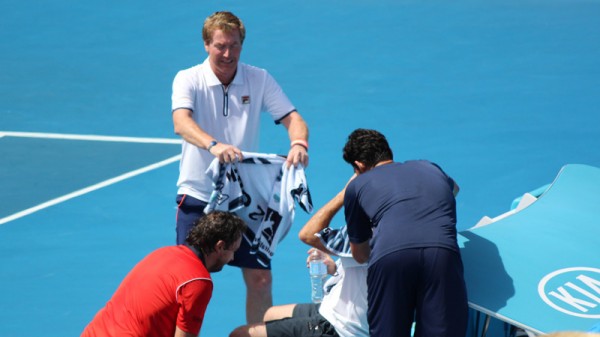 Climate change is threatening the future of Australian sport, experts have warned amid the country’s top tennis tournament.

After players fainted in temperatures of more than 40C last year, the Australian Open updated its policies, adding a roof to one of the courts to protect players from the scorching heat.

A Climate Institute report urged both elite and community clubs to do more to protect the health of players and fans.

John Connor, CEO of the Climate Institute, said: “Climate change and extreme weather events threatens the viability of much of our sport as it’s currently played, either in the back yard, at local grounds, or in professional tournaments.

“Football, cricket, tennis, skiing and more are struggling to adapt to, or prepare for, the impacts of climate change.”

Worldwide, US scientists declared 2014 the hottest year on record, confirming a warming trend.

The Australian government’s latest report on climate science predicted steeper temperature rises in Australia than the rest of the world.

On current emissions trends, it projected temperatures in Australia of between 2.8C and 5.1C higher than pre-industrial levels by 2090. The world average in the same scenario is 2.6C to 4.8C.

“We can’t afford to stay on the sidelines on this issue,” he said in the report’s foreword.

Professional sports bodies have heat policies to halt play if temperatures get unbearably high, but the thresholds range from 34C to 41C, the report found.

At last year’s Australian Open, play was suspended on uncovered courts only after several players suffered from heatstroke.

Spectators stayed away, too, with attendance dropping by 12-15,000 on the hottest days – making a significant dent in revenues.

At community level, the researchers found many football clubs had struggled with extreme drought in 2007, with games cancelled, low ticket sales and high costs to restore dried-up, cracked grounds.

“Climate change is putting our weather on steroids,” said Connor. “With greater warming, more extreme heat, changes in rainfall and more intense storms, there are questions about just how far we can push players in elite and local sport.”

In depth: China and Kazakhstan compete for carbon neutral Olympics

For winter sports like skiing, the threat is existential.

Nine out of 16 cities to host a Winter Olympics in the 20th century would not be able to guarantee snowy conditions now, the report found.

In Australia, snowfall has decreased by a third in the past decade.

“To protect what we can of the health of our sports, major changes will be needed in facilities, playing policies and climate action,” said Connor.