Arctic 30: Tales from a Russian prison

From Taser lessons to self-help sessions, Frank Hewetson recalls the highs and lows of jail a year on from his release 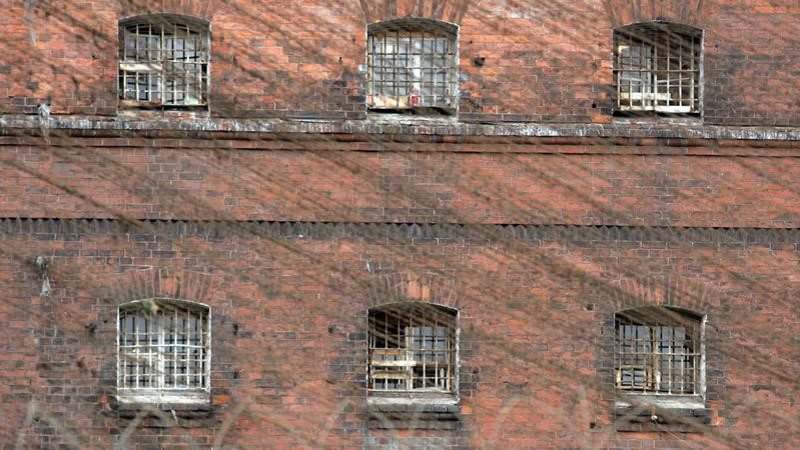 Kresty in St Petersburg – the nicer of the two prisons where the Arctic 30 were detained (Pic: Igor Podgorny/Greenpeace)

When 30 Greenpeace activists set sail on the Arctic Sunrise in September 2013, they did not anticipate spending the next two months in a Russian prison.

The campaigners hoped to stage a peaceful protest against Gazprom, the first oil company to start drilling in Arctic waters. Instead, they found themselves arrested by the Russian coastguard, charged with piracy and facing up to 15 years in prison.

The incident caused a diplomatic crisis, a UN maritime tribunal and shone a light on some of the dangers of climate change.

It did not stop Arctic drilling.

Gazprom’s oil rig went on to produce its first shipment in April last year, and Shell is considering plans to drill in the waters off Alaska this summer. But the Arctic 30 drew attention to the risks of interfering in this pristine environment, with Greenpeace estimating that the crisis advanced their Arctic campaign by five years.

Just over a year following the release of the Arctic 30 from Russia, British Greenpeace activist Frank Hewetson shares tales of what he went through during his dark two months in the prisons of Murmansk and St Petersburg.

The porridge was alright in the morning, and if you got food parcels coming in – if you got jam through – that was a massive bonus for your porridge.

The lunch was practically always very weak borscht, but occasionally you’d have a fish head in it, and quite often that fish head was rotten. That went straight down the toilet, and I never touched any of the meat.

In the evening it was another porridge. It was pearl barley with a bit of salt, and that was it.

Anything you got in from the outside was absolutely a huge bonus, and if you had a sense of preservation you would share everything with your fellow prisoners.

Greenpeace did become quite popular because we were getting so much stuff that suddenly they were eating chocolate, they had cans of this and that and the other.

Fruit was great, but that’s how you smuggle stuff in so every single fruit you got was sliced into quarters, and of course it was the same knife they use for everything, so you’d get an apple and it would have rust all over it. You had to do a lot of cleaning.

I had two cellmates, Vladimir and Sasha. Sasha was in for double manslaughter; Vladimir was the head of a Taser mugging gang in Murmansk. I had long, extremely fruitful conversations about how to use a Taser.

They were tough guys. Most of the people in those prisons were proper, proper criminals.

You’re in there with them, and they are your mates. That’s all you’ve got, and it’s very much you versus the prison system. You actually do gel as a unit.

They said to me once: “Frank, we are prison family.” And they meant it. 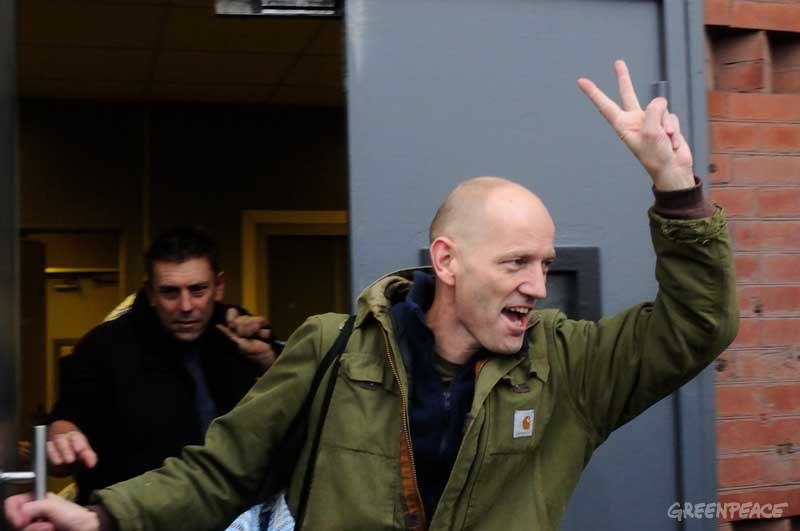 This guy sat down and he looked at me, and he had these shades on. There was absolute silence, and I was looking at him, and getting a little bit perturbed.

He leans forward and he goes: “I am prison psychologist. You must not be sad. You must think nice things – blue sky.” He went through sort of ten self-help guides about maintaining a positive outlook on life.

And I got up, got cuffed, and was led down the corridor. We went past cell 227, which I thought was a bit worrying, and taken straight back to my cell, put inside and the door slammed.

These are small cells, about two metres long by five metres wide, four bunks with three of us in there. Later that night, officials came in there. Everybody was crammed, and they got these huge reams of paperwork and they tried to make me sign it.

I was looking at it, saying, “No, I can’t sign it, it’s in Russian.” They ran off and got an English bit, and they came back, so I signed under duress at the bottom.

I looked at the top after they’d left, and it said Charge of Piracy, Article 227. And what the psychologist was saying to me was, you’ve got to start thinking positive because you’re being charged under article 227 – you are going down for 10 to 15 years.

Each cell was interlinked through this massive complicated network of strings – made with sheets, with plastic bags, out of anything you could get your hands on – going up and down and sideways. All the way back through the whole history of the Gulags, that’s how prisoners communicated

You would have a sock, and in that sock you would place a little note. That would go from your cell in this sock, and it would go either into an adjoining cell, up, down, left or right, they bring it in and send it on.

It would take about an hour to go the whole way around the prison. It’s not quite as quick as an email, but a similar amount of characters to Twitter I guess.

That was only way we could communicate. You tried to do it in the exercise yard, but you couldn’t see anyone because it was just concrete pens. You’d shout and, if you were lucky, you had one of the Arctic 30 next to you.

If you were unlucky, you had one of the Russian Arctic 30 next to you, and that was unlucky because they knew how deep in the shit we were. And you did not want to hear that.

So this communication from cell to cell was really important. I remember writing and saying, “Dima [one of the Russian Arctic 30], man, I’ve just been charged with piracy. I’m really, really worried.”

After about an hour, I got back: “Yeah, man, this is good news! It means the processes are moving forward, man.” His take on it was at least something was happening. 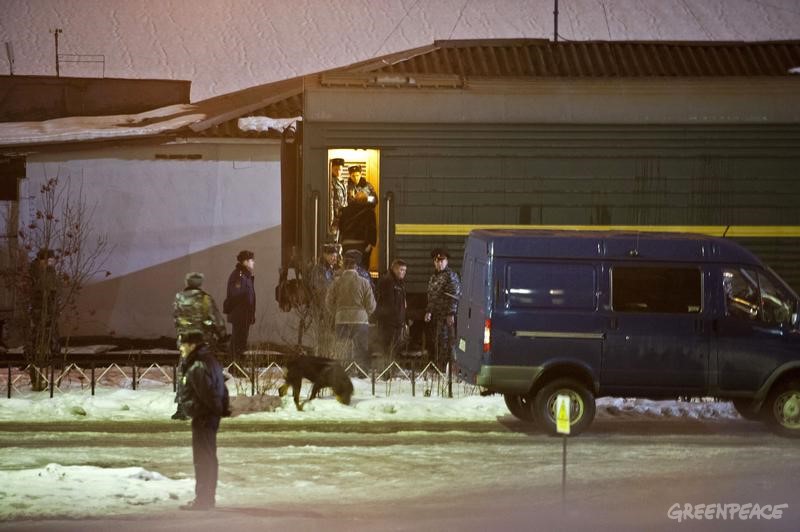 The Arctic 30 are transported from Murmansk to St Petersburg (Pic: Dmitri Sharomov/Greenpeace)

Murmansk was a mental hospital built in the 50s. It was totally awful. It was run down, there were rats, the radiators didn’t work, and the windows were broken.

Kresty – the St Petersburg prison – to me was a weird melange of Wormwood Scrubs and Salisbury Cathedral. It was fantastic.

I got into deep trouble once because in my shuffling I stopped because the wrought ironwork on the staircase was amazing. I was standing there looking at all these brilliant roses, when I suddenly got yanked away.

There was an actual church in the prison and I asked to see it. Just before we got given our bail, this guy came over and said: “You put a request in to see this church. Well, do you want to see it?” And I said: “I would love to.”

So they took me a different route while the others were getting released, and they took me into this cathedral. He pushed me in through these huge doors – which clinked and locked behind me.

It was huge and in the corners gathering dust there were icons and amazing religious artefacts. I looked up and could see all the workings of the bell and the clockwork.

Amazingly a lot of the paintwork had come off and it was covered in frescoes. In the communist era, all that had been painted over and it was starting to peel off. I noticed they kept opening the doors to make sure I wasn’t stealing, because after all it was a prison.

And eventually they took me out and we all got released. It was a wonderful moment. 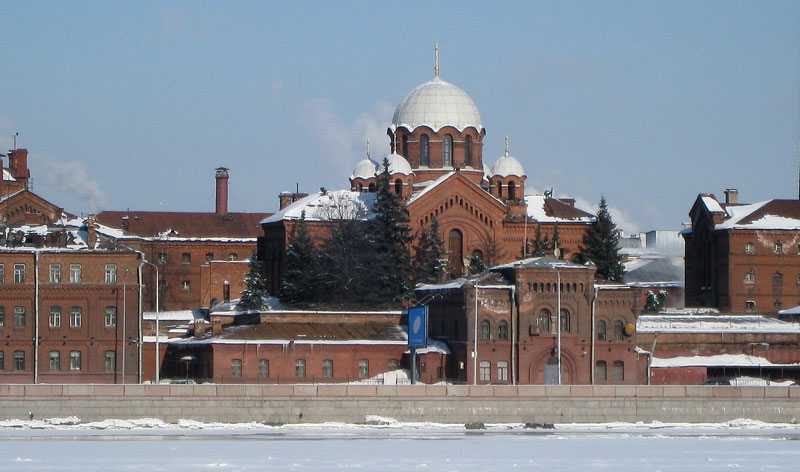 Church of Alexander Nevsky in the middle of Kresty Prison