Shell could drill in fragile environment next year, despite failure to deal with tar sands pollution 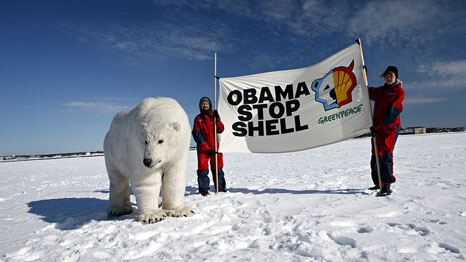 Shell has applied for a permit to drill for oil in the Alaskan Arctic next summer, in a move criticised by environmental campaigners.

The company hasn’t made a final decision to persevere with summer drilling in the notoriously difficult location, it said, but that the proposals submitted to Washington kept its options open.

“We are undertaking activities including submitting this plan, in order to keep the option of a 2015 season,” said Shell spokesperson Megan Baldino.

The plan proposes two drilling rigs in the Chukchi Sea, producing more than 400,000 barrels a day.

Environmentalists are staunchly opposed to oil exploration in the Arctic. They point to the difficult conditions and fragile landscape, which means an oil spill would be particularly damaging and challenging to contain.

The US Geological Survey estimates that around 13% of the world’s undiscovered oil reserves reside in the Arctic.

Climate campaigners, meanwhile, say it is illogical and financially risky to look for more oil when current reserves are more than enough to tip the planet into dangerous levels of warming.

Shell’s Arctic plans have been in motion for over a decade and cost around US$6 billion, but so far there is little to show for it. The company has drilled only two wells, neither of which struck oil.

Exploration in 2013 was thwarted by a series of errors, including Shell’s drilling barge, the Kulluk, running aground off the coast of Southern Alaska.

Plans were halted again in 2014, following a US federal court ruling that the area had been illegally opened to exploration.

“The company is lurching forward despite the flood of reports from government agencies and environmental groups that Arctic drilling is too risky, that the Arctic is too vulnerable, and that Shell itself is too incompetent to proceed,” said Greenpeace Arctic campaigns specialist John Deans.

“If the Obama Administration is serious about climate change, it needs to prove it by keeping Shell out of the Arctic.”

Shell’s failure to meet regulations in its exploitation of Canadian tar sands has given rise to further concerns that Arctic drilling could damage the environment.

Lorraine Mitchelmore, head of Shell Canada, admitted on Wednesday the company may not be able to meet its targets on reducing toxic waste produced by the oil sands.

“It’s going to be very challenging,” to meet targets for next year, she told the Wall Street Journal. She called for more flexible regulation that would ease requirements on the industry.

“Given the company’s highly controversial plans for US offshore Arctic drilling, investors should be troubled that the company’s focus appears to be on encouraging regulators to reduce requirements rather than ensuring full compliance with vital regulations.”