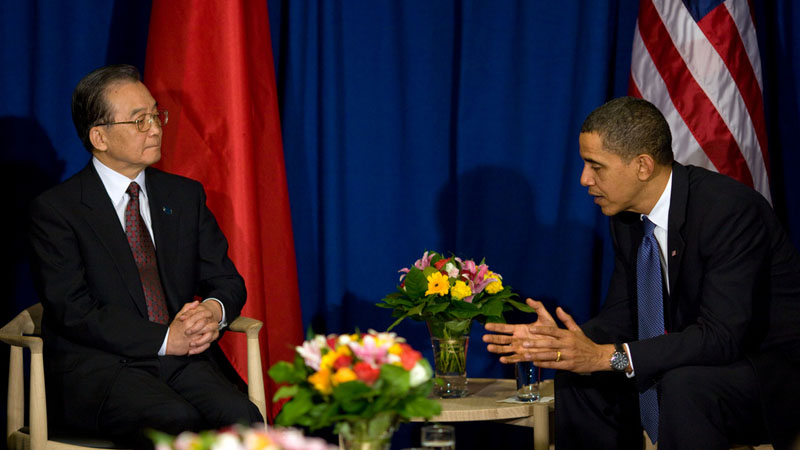 Early on Wednesday the US and China announced joint plans to curb their greenhouse gas emissions, a significant step from the world’s largest carbon polluters.

China’s president Xi Jingping said the country would aim for an emissions peak around 2030, while US president Barack Obama outlined a carbon reduction goal of 26-28% on 2005 levels by 2025.

The response to these headline measures has been varied. EU ministers reacted warmly to the news, as did mainstream green NGOs.

Scientists and climate analysts seemed less convinced, arguing the pact is not ambitious in the context of avoiding warming above 2C, a level deemed dangerous.

Chandra Bhushan from the Delhi-based Centre for Science and Environment, went further and said the deal was “self-serving” and will lead to “catastrophic” climate change.

The numbers are vital, and give the agreement a level of integrity. But perhaps what’s more important is the context in which this deal was struck.

Roll back five years to the snows of Copenhagen, and the UN climate summit which ended with an Accord to do very little on curbing global warming.

US-China relations froze in a matter of hours during those negotiations, first when China’s president Wen Jiabao thought Obama was ignoring him, and decided to retire in a grump to his hotel room.

Later it was Obama’s turn to get the hump, sparked first by the arrival of China’s deputy foreign minister He Yafei at the negotiating table instead of Wen. It was a “diplomatic affront”, official said at the time.

When Obama and his secretary of state Hilary Clinton discovered secret talks between China, India, Brazil and South Africa were taking place, his mood darkened further.

Observing the talks in his role as an advisor to the Maldives was British author and environmentalist Mark Lynas.

“Relations were at rock bottom,” he tells RTCC. “Leaders were shouting at each other.” 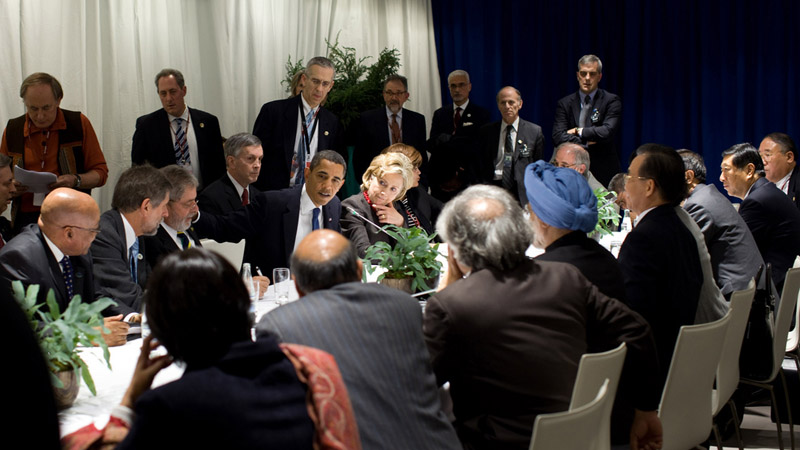 The Copenhagen Accord was thrashed out in a meeting with China, India, South Africa and Brazil (Pic: White House /Pete Souza)

Lynas’s account is backed up by recordings of one meeting in Copenhagen published in 2010 in Der Spiegel.

The cobbled together Accord ensured the meeting ended with some conclusion, but left a foul taste in the mouths of diplomats, and wrecked any trust between the US and China.

UN meetings are usually fairly well stage-managed. World leaders are brought in to agree on the final details, have a photo, make a speech and perhaps engage in limited high-level diplomatic bartering.

Copenhagen was an exception, and one that led to some heads of state – metaphorically – at each other’s throats, particularly the US and China.

Some, like Australia’s Kevin Rudd, left Denmark scarred, emotionally broken, according to his replacement as PM Julia Gillard.

In the context of this diplomatic catastrophe the Beijing pact looks like progress.

“China has moved a long way, and so has the US,” says Lynas. “The fact that China was under pressure post Copenhagen has helped move the leadership.”

Established in April 2013, it was spearheaded by four US climate hawks at the top of government; secretary of state John Kerry, lead negotiator Todd Stern, energy secretary Ernest Moniz and John Podesta – one time chief of staff for Bill Clinton and now Obama advisor.

Kerry, whose relationship with State Councilor Yang Jiechi has been vital, labelled Wednesday’s announcement a “fresh beginning” for countries “regarded for 20 years as the leaders of opposing camps in climate negotiations.”

“It was an effort inspired not just by our shared concern about the impact of climate change, but by our belief that the world’s largest economies, energy consumers and carbon emitters have a responsibility to lead,” he added, writing for the New York Times.

Amid a hostile political landscape in Washington, the Obama administration seems to regard climate as a legacy issue, one of the few policy areas along with healthcare it will be able to present as a success.

With the year’s final round of UN climate talks due to start in Lima on December 1, this deal could have a wider impact which is vital for a 2015 deal to float.

“There is a truth that if you don’t have US and China, you do not have an outcome. But if they are only the two playing, they are also not the solution,” a senior US administration official told RTCC earlier this year.

With the EU’s pledge to cut GHG 40% on 1990 levels by 2030 already on the table, the UN’s climate chief Christiana Figueres now has over 50% of global emissions already accounted for.

The clean energy industry also has a 1,000GW order book, after China committed to ensure non-fossil fuel sources would provide 20% of its energy by 2030.

“This positive momentum opens the door for all major economies and in particular all other industrialized nations to bring forward their contributions to the Paris agreement in a timely fashion over the coming months,” Figueres said in a statement on Wednesday.

What is interesting about China’s commitment is that it leaves other emerging economies in the cold.

Brazil, South Africa, Russia and India are historic allies against Western hegemony – countries with which China historically shared a negotiating position at the talks.

While China refused to play ball, they and other climate laggards like Canada and Australia had cover.

So too – as Joss Garman from the London-based IPPR thinktank points out – did climate sceptic lawmakers in the US and UK.

“This deal kicks their legs out from under them,” he says. “They’ll soon be back with new disingenuous reasons for inaction, but they are increasingly submerged by facts on the ground.”

As of today, the world is still on track to warm beyond 3C, evidenced by the International Energy Agency’s latest World Energy Outlook report.

But the news from Beijing is that the old walls blocking progress at climate talks are falling.

If and when Barack Obama brings up climate change at this weekend’s G20 in Brisbane, Tony Abbott or Stephen Harper won’t be able to use global inaction as an excuse for silence.

That, rather than emission trajectories, is perhaps the best context to look at this agreement, which sets the tone for Paris and beyond.