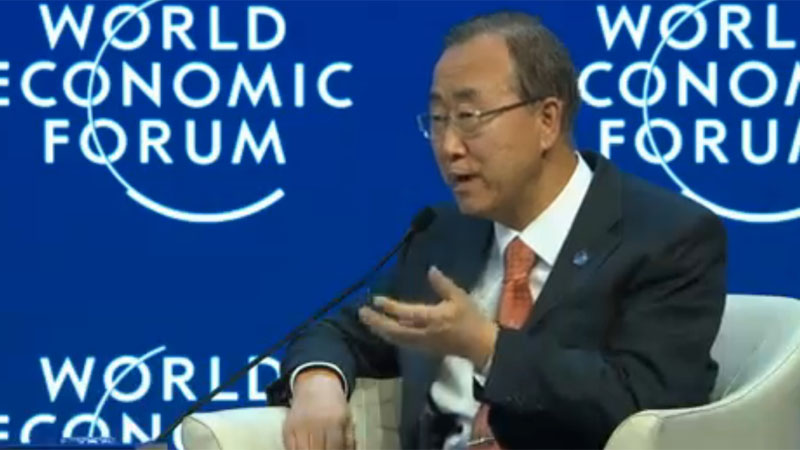 Speaking at a televised event at the World Economic Forum, Ban said forums like Davos and the G20 had failed to treat sustainable development seriously.

“We see this at the G20 and even here – we need to address this troubling disconnect,” he told a panel which included IMF chief Christine Lagarde and Rwanda president Paul Kagame.

“If we do not we will lock ourselves to bad long term investments which will make it impossible to hit the sustainable development goals and put ourselves at risk of costly climate change.”

Last year a panel including climate economist Lord Stern and former Mexico president Felipe Calderon reported US$ 90 trillion would be invested in infrastructure by 2030.

Without greater focus on greening financial flows from governments and business, the panel warned it was “near certain” that global temperatures would pass 2C, a level deemed dangerous by scientists.

Ban urged finance ministers to start ensuring that their domestic budgets allocated significant sums of capital to low carbon investments over the next three decades.

And he repeated his belief that countries will deliver a “robust climate change agreement” at a scheduled UN meeting in Paris at the end of 2015.

The UN’s chief impassioned plea came on the penultimate day of the annual summit, which attracts leaders from business, government and civil society to the Swiss resort.

Speaking at the same event, the chief executive of consumer goods multinational Unilever Paul Polman said economic growth was already being stifled because of climate change.

Polman – whose business reported a 2.7% downturn in sales for 2014 – said business leaders had a responsibility to declare their commitment to low carbon growth.

“We’ve been too long the silent majority – we have given the voice to the vocal minority,” he said.