NEWS: Fossil fuel giant says ‘stranded assets’ are not a risk to the company, as the world needs all its oil 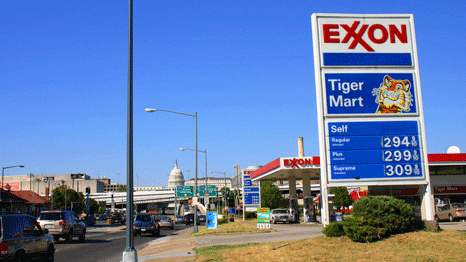 Government efforts to stop climate change are “highly unlikely” to reduce the amount of oil and gas that ExxonMobil intends to burn over the coming 25 years.

This is the outcome of two reports published today by Exxon, assessing whether the company might have to leave a significant proportion of their reserves in the ground, due to government restrictions on greenhouse gas emissions.

But the company has found that ‘stranded assets’ pose essentially no risk to their future operations. “The world will require all the carbon-based energy that ExxonMobil plans to produce during the Outlook period (up to 2040),” they say.

“The scenario where governments restrict hydrocarbon production in a way to reduce GHG emissions 80 percent during the Outlook period is highly unlikely.”

An 80% reduction in greenhouse gases by 2050 is the target that many – including the UK and the European Union – are advocating in order to keep the world below 2C of warming, beyond which governments have agreed the risks of climate change become unmanageable.

The reports were produced in response to pressure from stakeholders, who were concerned about the risk that strengthening climate legislation could pose to the value of the business.

New restrictions could slash the value of Exxon, which has the second-largest stockpile of carbon contained in its hydrocarbon reserves after Russia’s Gazprom. Bloomberg’s Carbon Risk Valuation Tool shows that the company’s share price could decline by 45% in a stranded assets scenario.

But Exxon said it they were not considering the possibility of such a ‘low carbon scenario’ emerging in the future, as the impacts of such an overhaul of the world’s energy systems would be more than society “would be willing to bear”.

For instance, they calculate that putting a price on carbon that would provide the market incentive keep carbon dioxide stable at a safe level would cost the average American household an extra $2,350 per year in energy by 2030.

They added that it was also incompatible with development agendas in poorer countries, where 1.3 billion people still lack electricity, with half of these in Africa.

They said that while it was always possible that the world could choose the low carbon pathway, “it is difficult to envision governments choosing this path in light of the negative implications for economic growth and prosperity that such a course poses.”

Under the banner of the UN, all countries are working on a deal to keep climate change from exceeding dangerous levels, which is due to be signed off in Paris in 2015.

Exxon said it would continue to focus on energy efficiency as a less damaging means of driving down greenhouse gas emissions, while continuing to provide from a growing demand in energy up till 2040 as populations and wealth expands globally.

While acknowledging that Exxon’s decision to publish information on its risk of stranded assets puts it a step ahead of other energy companies, including Chevron, who have refused to disclose this information, many have expressed disappointment at the outcome.

Natasha Lamb of Arjuna Capital, one of the companies who asked for the repost, said: “Investors now know that ExxonMobil is not considering a low-carbon scenario in its planning, which places shareowner capital at risk.

“We believe the company should protect shareholder value by divesting assets at greatest risk of stranding, diversifying investments into low-carbon alternatives, and returning money to shareholders that might otherwise fund future ‘at risk’ assets.”

Andrew Logan of Ceres, a sustainable investment group, said that “investors disagree” with Exxon’s verdict that a low carbon scenario was unlikely, and said they would continue to push Exxon to “align their planning with this reality”.

Anthony Hobley, CEO of Carbon Tracker, said: “Exxon saying there is no risk does not constitute prudent management of shareholder funds. It’s like King Canute assuming he can hold back the tide, but investors can see that a shift in energy is already coming in.”

The findings released on the same day that the Intergovernmental Panel on Climate Change released its latest report on the impacts of climate change. This confirmed that catastrophic effect that continued warming would have on food systems, infrastructure and human security.

Tim Ratcliffe, European Divestment Coordinator at 350, said: “It’s incredibly cynical of Exxon to announce that it intends to exploit its reserves until the last drop, the same day scientists highlight the sweeping impacts of climate change on humans on every continent.”