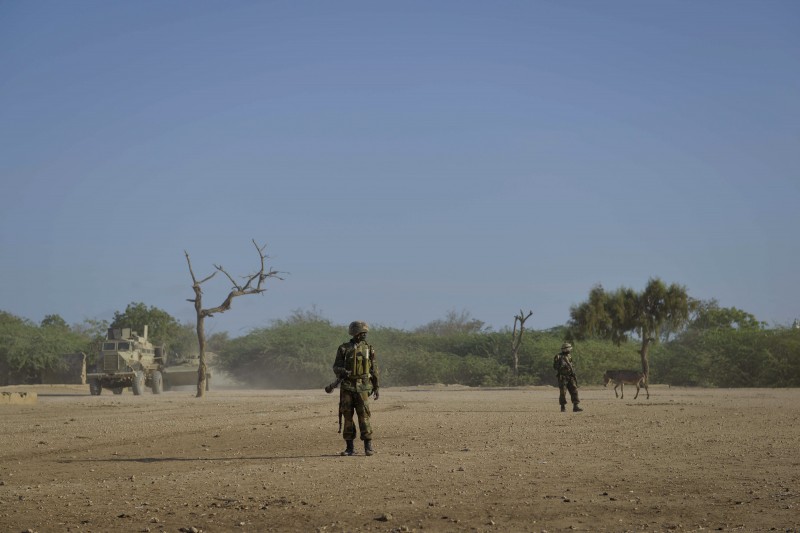 African Union soldiers, as part of the Ugandan contingent of AMISOM, conduct a foot patrol on April 29 through the town of Qoryooley, Somalia (AU UN IST PHOTO / Tobin Jones)

A chilling account of how climate change is already adding to the problems of conflict and social breakdown in fragile states is contained in an advice document to the staff of the UK’s Department for International Development (DFID).

“Topic Guides” on a variety of subjects are briefings to staff on key problems and how to deal with them when providing overseas aid. This guide, called “Conflict. Climate Change and Environment”, describes how and where society is already breaking down.

Although the guide – compiled by experts from the Overseas Development Institute (ODI) and International Alert (IA)− says climate change is only part of the problem, it concludes that it adds to food and water shortages, rapid urbanisation, unemployment, and weak and corrupt governance, which increase the chance of conflict.

It says that the both the British Foreign Office and the defence and security departments in the UK and US are concerned that climate change is making the world increasingly unstable.

The authors − Katie Peters, a climate and environment research fellow at the ODI, and Janani Vivekananda, IA’s environment, climate change and security manager − say that one of the ways to prevent the movement of people and other conflicts over resources is to build up the quality of governments, and so build an administrative structure that will give local people the ability to adapt to climate change and to deal with its consequences.

Although the document is aimed at briefing DFID staff so they can be better able to direct aid to where it will be of most benefit, it is is a strong counter-argument to many politicians in the UK who want to cut the overseas aid budget.

Despite savage cutbacks in domestic services in Britain, the government has preserved the overseas aid budget, arguing that it is in the country’s long-term interest to avoid more migration and conflict abroad. The guide makes the government case.

The authors say that by helping people to be more prosperous in their home countries, promoting resilience to climate change and improving the quality of government, then the threats to the UK are reduced.

“The consequences of climate change are felt daily and affect all sectors of development, peacebuilding and humanitarian programming,the guide says.

It quotes the Intergovernmental Panel on Climate Change 2014 report that “affirms that the impact of climate change on human wellbeing, peace and security will worsen, especially for the poorest members of society.

“Many of the most affected live in fragile states where under-development is intractable. Such communities are afflicted not only by persistent poverty, poor infrastructure, weak natural resource governance or unsustainable resource management, and lack of access to the world market, but also by the fragility of state institutions, political instability, and the effects of recent armed conflict or threat of looming violence.

“In many countries, as climate change interacts with other features of their social, economic and political landscape, there is a high risk of political instability and violent conflict.”

The guide says that many of the existing problems faced by poor and badly-governed communities are made worse by climate change − and ignoring its consequences might render other aid projects useless.

The authors advise that climate change impacts should not be viewed in isolation, but should be seen as part of a much wider effort to prevent conflict over resources such as food and water.

By promoting collaboration on all mutual problems, groups can be brought together to manage the impacts of climate change and the other causes of deprivation.