US cities face ‘blackouts’ due to climate-linked extreme weather

As global temperatures rise, cities in the US face growing threats from fierce and frequent hurricanes 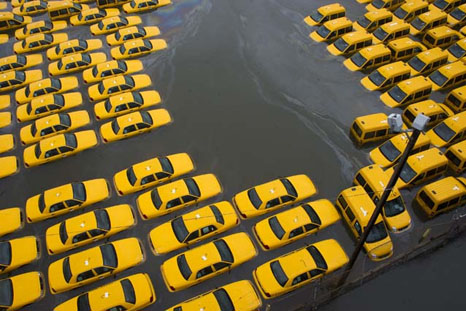 Researchers in the US have identified 27 cities that are likely to become more vulnerable to blackouts as a result of floods and high winds hitting the power grid.

They report in the journal Climatic Change that they matched evidence from the past – historic hurricane information – with scenarios for future storm behaviour throughout the US as global temperatures rise.

And then they looked at those cities most vulnerable.

Top of the list were New York, Philadelphia, Jacksonville, Virginia Beach and Hartford, which all could see a big increase in future risk of power cuts.

The cities most likely to keep the lights burning are Memphis, Dallas, Pittsburgh, Atlanta, and Buffalo.

In fact, there is no certainty about how global warming will affect hurricane patterns.

As sea surface temperatures rise above 28C, hurricanes tend to become more likely, and there is evidence that tropical cyclones in the Northern hemisphere are increasingly likely to threaten cities once considered beyond the hazard zone.

But hurricanes are capricious monsters, and how their characteristics will change with warmer atmosphere is still debated. So the scientists looked at a range of possibilities.

Cities already at risk – such as Miami and New Orleans – will remain at risk. But New York and Philadelphia, and even some inland urban areas, could become susceptible to increasing storm activity.

For New York – devastated by Superstorm Sandy in 2012 – and Philadelphia, the probability of the kind of storm previously considered a once-a-century event is likely to increase by 50%.

Report: Flooding could cost US$1 trillion a year by 2050

More people would lose power more often, and the worst storms could be substantially more intense.

The point of the research is to make civic authorities more aware of potential future hazards.

“We provide insight into how power systems along the Gulf and Atlantic coasts may be affected by climate changes, including which areas should be most concerned and which ones are unlikely to see substantial change,” said Seth Guikema, a geographer at Johns Hopkins University in Baltimore.