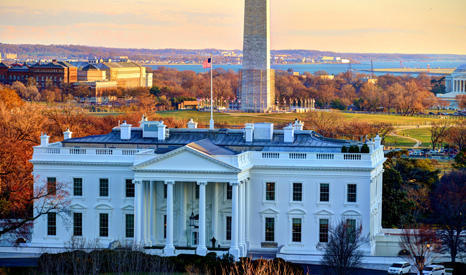 Washington DC could be under siege from rising sea levels by the middle of the century, according to the US Union of Concerned Scientists.

In a report published on Wednesday it says the US capital faces the prospect of more than 300 tidal flooding events a year by 2045, a significant rise on the 50 it experiences at the moment.

New York, Miami and Annapolis and Atlantic City are among the other major East Coast cities likely to face challenging sea level conditions by the 2050s, it said.

Erika Spanger-Siegfried, a co-author of the report and senior analyst at UCS, said coastal communities can expect “dramatic changes” as a result of flooding in the coming 30 years.

“In 15 years, many of the 90 tidal floods we expect in the Atlantic City area would close roads that link west Atlantic City to the mainland, without adaptation efforts,” she said.

The study is based on existing data from 52 tide gauges stretching from Maine to Texas, together with future projections of sea level rise.

This tallies with the Intergovernmental Panel on Climate Change’s 2013 AR5 report, which forecast a rise of 52-98cm by 2100.

High tides and storm surges on top of these rises will likely overwhelm existing defences, said the UCS, causing a range of problems ranging from patches of standing water in parks to flooded roadways and submerged electricity lines.

“High tides matter more today than in decades past because our shores are more highly developed, and because these tides are occurring on top of elevated and rising sea levels,” it said.

The UCS said its research demonstrated the need for US authorities to integrate future climate impacts into their long term infrastructure plans, especially along the coast.

It wants state and federal governments to explore flood proofing for homes and to avoid new building in low-lying areas.

“Without serious measures, frequent flooding will start to disrupt daily life and change the way an area functions—and could do so sooner than most of us anticipated,” said Spanger-Siegfried. 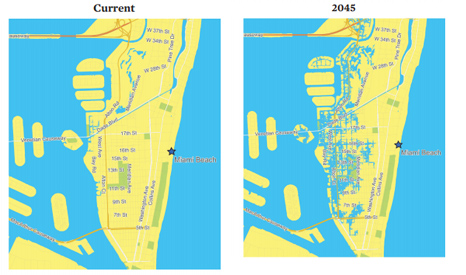 It highlighted the risks of sea level rise, pointing to the five million Americans and billions of dollars worth of property located near coastal areas.

The assessment said US planning for future impacts was at a “nascent stage” and most states and local governments had done nothing to implement adaptation strategies.

“Despite emerging efforts, the pace and extent of adaptation activities are not proportional to the risks to people, property, infrastructure, and ecosystems from climate change,” it said.