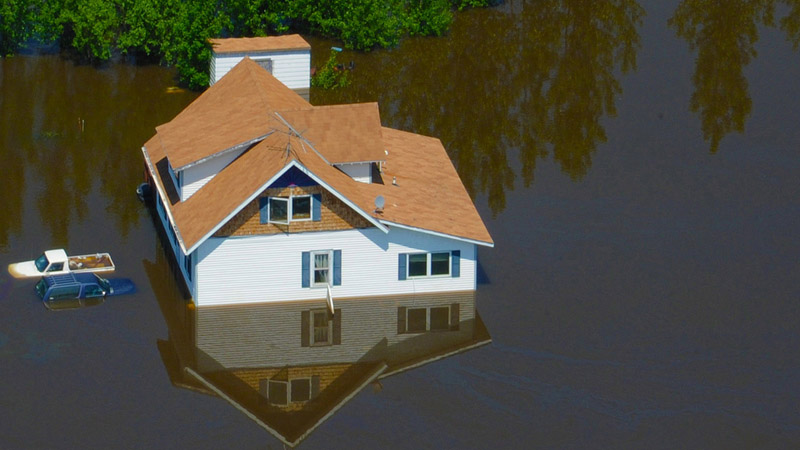 Flooded neighbourhood in the US state of Minnesota (Pic: DVIDSHUB/Flickr)

Global average temperatures continue to rise, but new research shows that the extremes of heat and cold are rising even faster.

Scientists report that heat waves have got hotter and cold snaps have got colder at a more extreme rate – and that continuing greenhouse gas emissions will mean that, in another two decades, Europe could experience once every two years the sort of lethal heat waves that occurred once in a thousand years.

Scott Robeson, professor of geography at Indiana University Bloomington in the US, and colleagues report in Geophysical Research Letters that they analysed a set of temperature records from 1881 to 2011 and graded them according to how near or far they were from the normal averages of any particular region of the globe.

They found that the temperature anomalies – extremes of heat and cold – increased more than the overall average temperature of the whole planet.

They also found that cold anomalies – unexpected ice storms, blizzards and big freezes − increased more than the warm anomalies until about 30 years ago. Since then, the heat waves have started to outpace the cold snaps.

The study offers a new way to consider the much-debated “pause” in global warming since 1998. It could be that warming continued over most of the planet, but was offset by strong cooling in the winter months in the northern hemisphere.

“Average temperatures don’t tell us everything we need to know about climate change. Arguably, these cold extremes and warm extremes are the most important factors for human society.”

Robeson and his colleagues are not the first to identify the importance of extremes of temperature in the pattern of global averages. Nor is this the first time that UK Met Office scientists – this time led by Nikos Christidis – have forecast more, and more severe, heat waves, not just in Europe but in many regions.

In 2004, Met Office researchers looked at statistics since 1990 and decided that the 2003 European heat wave − estimated to have claimed at least 20,000 lives, and possibly many more − had been made more than twice as likely because of human influence on the climate.

In a paper in Nature Climate Change, they look at the pattern of warming between 2003 and 2012. In that period, summers on average warmed by 0.81C.

This warming means, they say, that heat waves − and extreme heat waves such as the lethal event in 2003 − have become 10 times more likely.

“Extremely warm summers that would occur twice in a century in the early 2000s are now expected to happen twice a decade,” Dr Christidis says.

“Moreover, the chances of heat waves as extreme as seen in 2003 have increased from about one in a thousand to about one in a hundred years, and are projected to occur once every other year by the 2030-40s under continuing greenhouse gas emissions.”