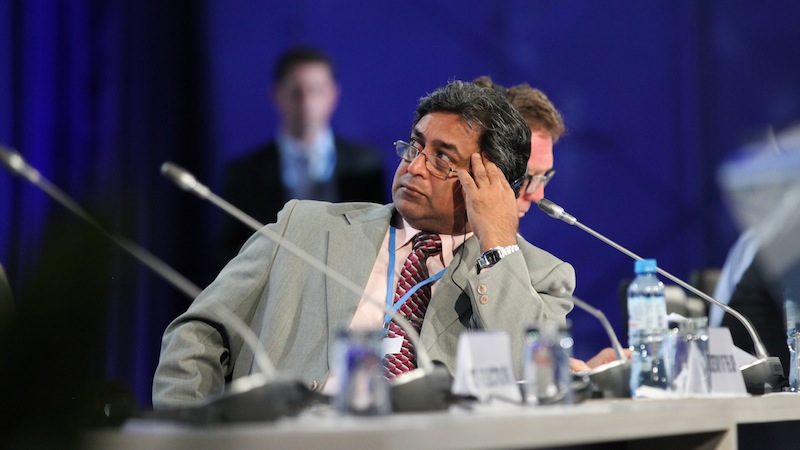 International talks aimed at developing an agreement to tackle global warming are now in extra time, with negotiators predicting a conclusion in the early hours of Saturday morning.

Late Thursday envoys from the 192 countries represented at the meeting were presented with a new and radically condensed set of proposals aimed at cutting greenhouse gas emissions.

At stake are the principles that will underpin a UN agreement to limit warming to below 2C, scheduled to be signed in Paris next December.

Tony de Brum, Marshall Islands foreign minister, said the text was a “good basis for work” but warned time was running out. “We are unwilling to leave with empty hands,” he added.

Envoys from the EU, small island states, least developed countries and a Latin American alliance all welcomed the seven-page document, which outlines the types of carbon cutting and financial commitments countries should make before Paris.

Two main issues appear to be holding up the talks. The first is whether developed and developing countries should face different obligations under a 2015 deal.

The second is what climate pledges for this agreement (known as intended nationally determined contributions) should contain and how they will be assessed.

Delegates from India and China also described the draft as “good” but expressed reservations over a lack of any reference to the different roles of rich and poor countries under a 2015 deal.

India’s representative said this could damage the integrity of the UN climate convention, which says the onus on tackling climate change should be on countries that were classed as rich in 1992.

“The text is good, but question is whether it is good enough and covers the concerns of all parties,” he said. “We see the unravelling of this mandate, this is unacceptable.”

China emphasised that any agreement in Lima must stress that only developed countries had a responsibility to provide finance and technology support to developing countries.

“For us, it will either be death or climate justice”: protesters from vulnerable nations at #COP20 pic.twitter.com/bWwHeLnTYJ

“The principle of the Convention, differentiation and means of implementation should be correctly reflected in the text,” their  representative said.

A leaked briefing document from the Like Minded Developing group, which includes Venezuela, Saudi Arabia, Iran and India indicates they could block any Lima agreement unless this is resolved.

“Countries have to separate the pre and post 2020 cycles,” said Jennifer Morgan, a negotiations expert at the World Resources Institute. “Differentiation is difficult to solve.”

Morgan said this toxic issue would be best left for further discussions in 2015.

The other sticking point is the list of rules dictating what country contributions to a UN deal will need to include.

Countries ready to do so are required to deliver their climate pledges by March 2015.

The current text leaves open what needs to be in these contributions and how they should be presented, offering instead a series of options for envoys to agree on before they leave Lima.

All countries accept that emission cuts will be a central element, but many poorer nations want financial and climate adaptation assurances as well.

EU negotiator Pete Betts appeared to drop the bloc’s opposition to including adaptation, but emphasised it would not offer any longer term financial assurances.

“We are prepared to explore language that would give reassurance to parties. We see this as a facilitative not a confrontational process,” he said.

But Betts stressed this could only happen if countries agreed to stringent rules measuring and accounting for their national pledges.

The toughest of the three options demands countries specify timeframes, quantified outcomes, the level of offsets that would be part of a pledge plus details of financial help for poorer countries.

Along with the EU and US this is a position backed by small island states, Mexico and Switzerland but fiercely opposed by India and China.

“We have serious concerns but we know there is a need to try and find solutions,” Betts said.

“We are prepared to explore the possibility of allowing INDCs to include adaptation on a voluntary basis if we can secure ambitious up front information.”

Nick Mabey, a climate expert with think tank E3G, said it was vital transparency could be integrated into the final agreement.

“What we’ll be watching for is a clear process by which the ambition of pledges can be discussed next year in a transparent and collective manner, rather that relying media reports and think tanks,” he said.

Talks are expected to last well into the early hours of Saturday morning.

In particular the lack of reference in the Lima decision text to avoiding warming beyond 1.5 or 2C, levels deemed dangerous by climate scientists, has alarmed observers.

“The options presented are like a choose your own adventure novel, some could put us on a barely workable path heading into Paris, while others may doom us to a dangerous future,” said Oxfam’s Jan Kowalzig.

Harjeet Singh, International Manager for Resilience and Climate change at ActionAid said he was disappointed with the lack of reference to loss and damage, otherwise known as climate compensation.

“Rich nations have been dragging their feet, but we can’t allow this essential element to slip off the table when we know that climate crises are going to get far worse with rising temperatures.” he said.

Earlier on Friday campaign group 350 presented a petition with 53,000 signatures to the UN climate body, calling for fossil fuel corporations and their lobbyists to be banned from future meetings.

Activists were angered by the presence of representatives from oil giants Shell and Chevron earlier this week, accusing them and other business interests of having too much influence in Lima.

“This process needs to hear the voices of the people, not polluters,” said Hoda Baraka, 350 communications manager.