No Lima climate deal better than bad one, say ‘like minded’ countries 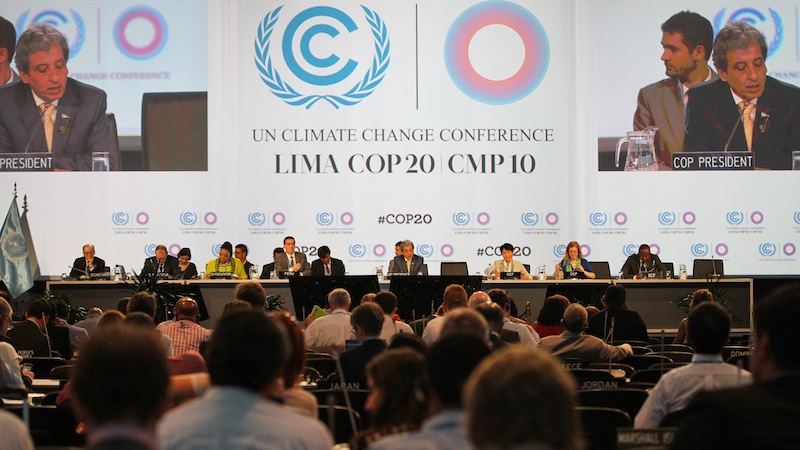 An influential coalition of countries participating in the UN climate talks have indicated they would be prepared for an agreement to be postponed until early 2015, according to a leaked document.

Negotiations in Lima are aimed at providing a set of guidelines for countries aiming to participate in a global emissions reduction deal, scheduled to be signed in Paris next December.

A set of briefing notes sent to RTCC suggests the like minded development group of countries, which includes Venezuela, Iran, Saudi Arabia and India, told Peru’s environment minister Manuel Pulgar Vidal they could not accept proposals currently on the table.

“If in the end, no consensus can be reached in time, it is possible to transmit the relevant documents for further work to the next meeting  We do not consider this a failure at all.  Instead, it is a mark of progress, especially progress in the process,” the note says.

Late on Thursday a new text for an agreement was released by the UN, which has left many of this group unhappy.

A key bone of contention is the way developed and developing countries are treated differently at these talks.

A new deal would mean all nations have to make a contribution to cutting emissions, as opposed to previous agreements where it was richer nations with more “historical responsibility” for greenhouse gas emissions.

Postponing a decision in Lima would be a major blow to the UN process.

Emerging economies have been asked to submit their contributions by March 2015, while a draft version of the main agreement needs to be ready by May 2015.

Few observers RTCC has spoken to believe the Lima summit will end without some kind of compromise, although one developed country representative said it would be a “miracle” if they ended on Friday.

You can read the full briefing note below.

Our views on Process.

1. We have been happy with the inclusive, transparent manner of last few days in the ADP with proposed changes put on the screen.  Of course this should have been done earlier as LMDC kept telling the Co Chairs since March.  Ideally we should continue with this process.  There is a document with the various views as options.  If time has run out, one option is to send this document for further work at the next meeting of ADP (Geneva Jan 2015).

2. We don’t want a “clean text”  parachuted down on the last day by Co Chairs or Presidency asking Parties to adopt it, on grounds there is no more time.  We also do not want  a “reverse consensus” situation where countries who want to change a word or a para are asked to get consensus to change it.  We also do not want  a repeat of the undignified and undemocratic process of last minute “huddles” where only a few countries who know how to fight for space and how to  invent words on the spot get to make the decision.  Therefore please respect the democratic UN process, even if some members feel that “time has run out.”

3. LMDC has its own views on each paragraph of the ADP draft decision.  We have been putting forward our concrete views on the text, with our own language put on the screen and in the compilation draft.   This is our constructive way of helping with the process.  If you want to convene consultations to help bridge the differences in texts between the Parties, LMDC is willing to join in and to assist you.

4.  If in the end, no consensus can be reached in time, it is possible to transmit the relevant documents for further work to the next meeting  We do not consider this a failure at all.  Instead, it is a mark of progress, especially progress in the process.  The Lima COP would have restored the open, participatory process of the UN and the multilateral system.  Restoring the democratic process would be a very important achievement and would contribute more than anything else to the success of Paris 2015.  If an undemocratic process is adopted, this would generate further loss of confidence in the system, which would be bad for the remaining process towards Paris.

Our views on Contents

1.The national contributions (INDCs) must contain all elements (mitigation, adaptation, finance, technology etc) in a balanced way, just as the Paris agreement has to have all elements.  It cannot be mitigation-centric.

2.We cannot accept new terms and concepts that have not been agreed to and that have appeared in the draft decision, such as “evolving CBDR”,  “countries with the greatest responsibilities”, “countries in a position to do so.”  These terms in fact change or reinterpret what is in the Convention, and there is no agreement what they mean.

3. The draft decision has many paragraphs relating to an ex-ante assessment process such as placing INDCs on internet and requiring countries to reply to questions, and holding forums etc. to ratchet up the mitigation goals.  At the same time there is no assessment on contributions in finance.  It is unfair to ask developing countries to jack up their mitigation goals without a corresponding assessment and jacking up of finance  goals.   We are thus against  any ex ante assessment in the Decision.  Any assessment process that may be discussed in future has to be preceeded by agreement on what is the methodology, modalities and definitions of what is to be assessed. Any assessment process has to be after the Copenhagen agreement is concluded.

5. INCDs, like the Paris agreement, has to be in line with principles and provisions of Convention especially equity and CBDR.  This should be operationalized by (1) differentiated obligations between developed and developing countries in their “contributions” in mitigation (economy wide reductions for annex 1 and diverse mitigation actions backed by finance and technology transfers.   (2) Also, developed countries should meet their finance and technology commitments.