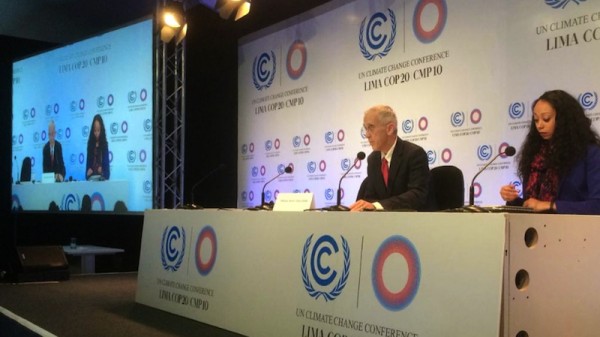 Lead US climate official Todd Stern has defended his government against claims it has backtracked on a previous target to reduce emissions 30% by 2025.

President Obama recently announced a 26-28% reduction in US greenhouse gas emissions by 2025, which was warmly welcomed around the globe as a boost to international efforts to tackle climate change.

But the announcement, made with China last month, was weaker than the pledge Washington made in 2009.

“That was never our pledge. Our pledge was just for 2020,” Stern said, arguing the numbers were a footnote and were not realistic assessments given the current US political climate.

He added that the longer term targets had been conditional upon legislation that the US government was trying to pass at the time. The Waxman-Markey bill would have established a carbon market in the US, but it was rejected by congress.

Stern said the US had taken more ambitious action on climate as a result. The failure of the bill meant that the country had to reduce its emissions at home, rather than pay for other countries to do so on their behalf.

Since then, President Obama has ordered the power sector to reduce its emissions 30% on 2005 levels.

But the perceived backtracking from a pledge made at a previous UN conference has concerned delegates at talks in Lima, which have entered their second and final week.

Chinese officials questioned their US counterparts today over the weaker 2025 emissions goal.

As countries prepare to put forward their emissions reductions goals for the new UN deal that will be signed in Paris in 2015, parties are looking for assurances that everyone will stick to their word.

And the strength of the final agreement is yet to be settled, which means that there is no certainty that countries will be formally bound to the targets they propose.

The US in particular is arguing for a weaker legal structure, so that the Paris deal will not have to be ratified in Congress, where the Democrats now have a minority.

“There are lots of informal discussions going on about legal nature of the deal,” said Ruth Davis from Greenpeace.