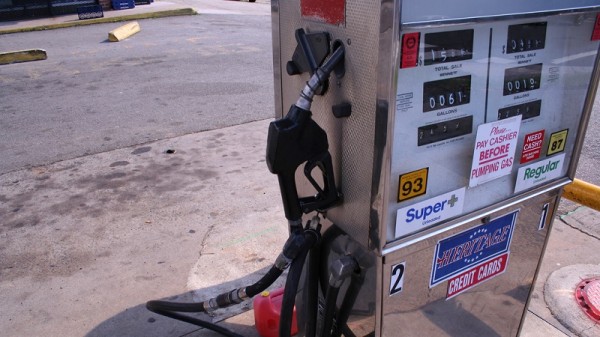 Put carbon price up while fuel is cheap, the IEA has urged
(Pic: Flickr/Johnny Overpants)

Oil prices have plummeted in recent months, from US$115 a barrel in June to less than US$70.

That dramatic shift could increase greenhouse gas emissions in the short term, as consumers take advantage of cheap fuel.

Maria van der Hoeven, executive director of the International Energy Agency, said they could consider measures that “would have been unthinkable a year ago”.

She was addressing media at the UN climate talks in Lima, where negotiators are considering a target of net zero emissions by 2050.

That target, which would all but eliminate fossil fuels from the energy mix, may be “too ambitious”, van der Hoeven warned.

The IEA’s world energy outlook only runs to 2040, but it envisages a significant role for fossil fuels for decades to come.

“The reduction in the price of oil will limit in some way the renewable development – that is without question,” said Mexico’s environment minister, Guerra Abud.

Despite being an emerging economy, Mexico has cut emissions 4.5% over the past three years and brought in legislation to support green energy.

As an oil exporter, Mexico’s coffers also suffer directly from a lower price, although Abud said his finance colleagues were “wise enough” to take out insurance.

Philippe Joubert, head of the Global Electricity Initiative, told RTCC: “Obviously, [the low oil price] is not helping renewables, because basically the business case for fossil fuels is improving in terms of immediate costs.”

But he added utilities were long term businesses and would be more concerned about trends than short term price movements.

Germany has an emissions reduction target of 40% from 1990 levels by 2020 – stronger than is required by the European Union.

But a recent assessment showed it was only on course for 32-35%, as a result of rapidly phasing out nuclear power and burning more coal.

One of Germany’s biggest energy utilities, Eon, recently announced plans to sell off its fossil fuel assets, to focus on renewables and energy services.

Adnan Amin, head of the International Renewable Energy Agency, said the oil price drop would not make a big difference in the electricity sector.

“The place where the impact will be felt the most is a chilling effect on use of biofuels for transport and heating,” he said.