Government ministers, delegates and half the population of Tuvalu joined activists in “historic” day of climate activism 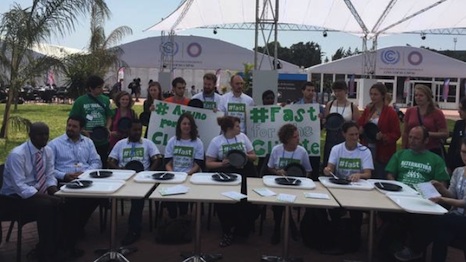 Activists around the world have staged the largest fast for the climate so far, as UN negotiations get underway in Lima.

An estimated 10,000 people across the globe gave up eating today in an attempt to prompt stronger action on climate change.

The figures were bolstered by the Pacific island of Tuvalu, where about half the population fasted following a call from Penitusi Taeia, the president of the Christian Church of Tuvalu. Of Tuvalu’s 10,000 population, 94% are members of this church.

“This is the biggest climate change fast that has ever happened. We are making history,” said Martin Kopp from the World Lutheran Federation.

Figures are based on website sign-ups, along with estimates of those who are fasting privately.

As a movement that has been particularly popular among faith groups, many do not advertise their actions, added Kopp; the Bible says that Christians should disguise their fasting so that it “may not be seen by others, but by your Father who is in secret”.

As the majority of delegates at the UN talks in Lima headed to the cafeteria for lunch today, activists staged a protest at the venue.

@FastForClimate fasters are gathered together at COP20 in Lima to show solidarity with the victims of climate change pic.twitter.com/bklQSswCuN

Government delegates in Lima from Fiji, Nauru and the Cook Islands also joined the fast.

Filipino negotiator Yeb Sano launched the movement at the UN talks in Warsaw one year ago following Typhoon Haiyan, which ripped through the Philippines at the outset of last year’s talks.

Sano, joined by other activists, fasted for the thirteen days of talks in protest at the lack of progress on climate change so far. Since then, climate activists around the world have fasted on the first of every month.

Although he is not in Lima this week, Sano addressed activists by video link.

“Fasting nourishes our soul and it takes care of the moral hunger in our hearts,” he said. “We stand today together to confront this climate crisis. We fast for the climate because we care about the future of this world.”

Between now and next December, when the UN’s deal is set to be signed in Paris, climate campaigners will stage a 365-day fasting “chain”, members of the movement announced today.

Over the course of the year, one person will fast every day between now and the Paris conference, starting with two months in Latin America, sweeping across the USA, the Pacific, Africa and Europe, before finishing in France.

“Our hunger for action will not stop. It will keep going until Paris,” said Kopp.