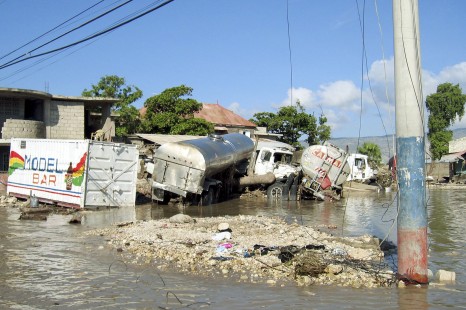 Over 20 civil society groups at the UN climate summit in Warsaw have joined lead Philippines envoy Yeb Sano in a fast, protesting against what they say is a lack of ambition at the talks.

In the wake of the destruction caused by Typhoon Haiyan in his country, Sano announced on Monday he would not eat until a “meaningful outcome” was reached in the Polish capital.

He also called on rich nations to cut their emissions and outline how they will boost climate finance contributions from about $7 billion in 2013 to $100 billion a year by 2020.

Sano said he was “deeply touched and profoundly moved” by the decision of many youth delegates to fast for 24 hours or the rest of the summit.

Wael Hmaidan, director of Climate Action Network, is among those who have joined Sano in going without food. “We need new ambition that from the statements so far does not exist”, he said.

The dangers posed by extreme weather events like Haiyan were underlined by a report released on the sidelines of the summit on Tuesday revealing that the Philippines, Haiti and Pakistan were hit hardest by natural disasters in 2012.

According to the Germanwatch policy institute extreme weather in the past 20 years killed around 30,000 people, causing US$2.5 trillion of damage. Last year’s Hurricane Sandy caused losses in Haiti equalling 10% of its GDP.

“Our results are really a wake-up call to ramp up international climate policy and to better manage weather-related disasters”, said Sonke Kreft from Germanwatch.

Scientists say rising levels of greenhouse gas levels will cause incidences of flooding, rising sea levels and drought to increase in the coming decades.

One track of negotiations in Warsaw is focused on whether a loss and damage mechanism could be created to help compensate countries for climate related destruction.

While this is a deeply contentious issue, one Latin American negotiator who declined to be named said Sano’s fast would put pressure on rich nations to offer something in return – perhaps in the form of unilateral pledges.

Separately, there appears to be growing confusion at the talks over the future of Australia’s emission reduction pledges.

Reports from Canberra indicate Prime Minister Tony Abbott has ruled out increasing the country’s current target from 5% to a 15-25% range supported by campaigners.

“Australia will meet our 5% emissions reduction target, but this government has made no commitments to go further than that,” he told reporters.

Abbott is on record as calling climate science ‘crap’ and describing efforts to cut emissions ‘socialism masquerading as environmentalism’.

Few analysts expect any new announcements from Australia, but the country’s Oxfam representative Kelly Dent said a refusal to consider future cuts was “brutal” given recent events in the Philippines.

“We would call on Tony Abbott to clarify these reports, which indicate that Australia is walking away from a 25% target, and reconsider the financing issue,” she told RTCC.

“This is horrendous timing in the wake of Typhoon Haiyan. The Philippines and other countries urgently need money to implement early warning systems.”

John Connor, head of the Sydney-based Climate Institute added: “The Government is blowing smoke and distraction around its climate intentions, so Parliament needs to clear the air before going down the path of turning Australia  into the world’s first country to dismantle laws that price and limit carbon pollution.”

RTCC contacted the Australian delegation for a response to this story.