Ocean temperatures break new record, as 2014 looks set to be hottest year ever 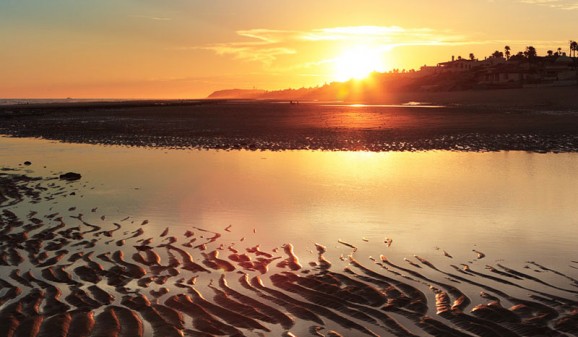 Oceans are the hottest they have ever been, putting an apparent end to the global warming pause of the last 14 years.

Analysis of new data by Axel Timmermann, a climate scientist at the University of Hawaii at Manoa, found that this summer saw the highest global sea surface temperatures since records began.

The temperatures even exceeded those of 1998, when a particularly intense El Nino killed off 16% of the world’s coral.

“The 2014 global ocean warming is mostly due to the North Pacific, which has warmed far beyond any recorded value and has shifted hurricane tracks, weakened trade winds, and produced coral bleaching in the Hawaiian Islands,” said Timmermann.

Along with atmospheric temperatures, sea surface temperatures have slowed over the last 14 years, despite increasing greenhouse gas emissions. This has led some climate sceptics to question the impact of carbon dioxide on the atmosphere.

While acknowledging the paradox, scientists have repeatedly confirmed that the pause can be explained by natural variability, where long term trends are hidden in the natural swings of the climate across decades.

The new analysis suggests that this period of relative stability in ocean temperatures came to an end in April this year, when warming picked up speed again.

Explaining why the oceans have warmed so dramatically this year, Timmerman said: “Record-breaking greenhouse gas concentrations and anomalously weak North Pacific summer trade winds, which usually cool the ocean surface, have contributed further to the rise in sea surface temperatures.

“The warm temperatures now extend in a wide swath from just north of Papua New Guinea to the Gulf of Alaska.”

According to the UN’s IPCC science panel, the oceans are where most of the heat caused by climate change is stored.

Scientists at the IPCC says 90% of the energy accumulated on the planet between 1971 and 2010 was stored in the ocean. Only 1% went into the atmosphere.

They add that the upper 75 metres of the ocean warmed by 0.11C in the same period.

The expansion of the water due to this heat, along with the melting of the glaciers, has caused the oceans to rise, with damaging effects on small island states and coastal communities, which have caused their land to erode.

But the ocean is not the only place to break the heat records this year.

2014 is currently on track to be the warmest year ever, according to NOAA, the US federal weather agency.

May, June, August and September were all the warmest on record, it said. 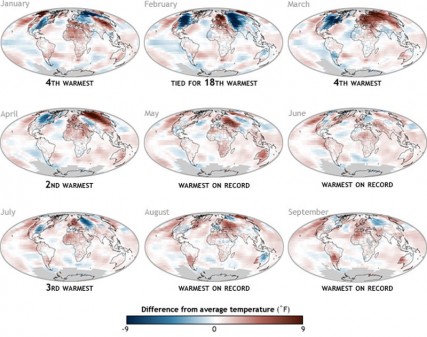 “Scientists can’t know for certain how the final months of 2014 will play out in terms of temperature patterns, but there are good reasons to suspect this year may well set a new record for warmth,” the agency said in a review.

The Japan Meteorological Agency recorded the country’s hottest October on record, coming in at 0.67C above the 20th century average.

But as to whether the global warming pause was over in terms of atmospheric temperatures, Met Office climate scientist Richard Betts said it was too early to say.

“Even if this year ends up with a record global average surface temperatures, which is possible, that would just be one year. We’d need more than that,” he told RTCC.

Betts added: “‘Has the pause ended?’ will be an important research question for some years.”