Earth on course for hottest year since 1880 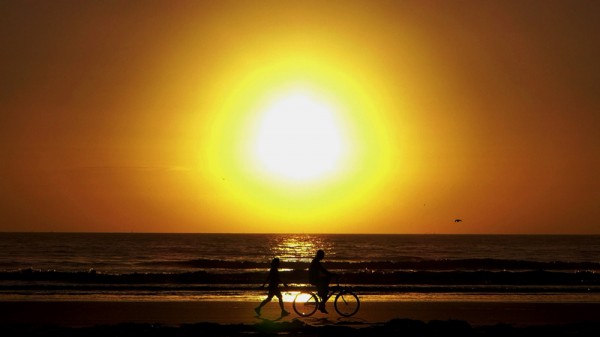 The world is on course to break the record for the hottest year since 1880, according to US scientists.

In their latest review of the Earth’s climate the National Oceanic and Atmospheric Administration says monthly temperatures since the start of the year have been consistently higher than average.

“If the surface temperature remains elevated at the same level for the remainder of the year, 2014 will set a new record for the warmest annual average temperature since records began in 1880,” says NOAA, a US government agency.

According to its data, January-September 2014 is the joint warmest on record. May, June, August and September were “record warm” around the world, says NOAA.

In an interview with the AP news agency, NOAA climate scientist Jessica Blunden said it was “pretty likely” that 2014 will be the warmest on record.

One reason NOAA offers is the “persistent record warmth in the global ocean”, which it says “strengthens the chances of the year’s final three months resembling the first nine.”

As the chart below indicates, parts of Russia, Asia and the mid-west US experienced cooler temperatures than usual in 2014, but overall the data reveals warmer than average temperatures. 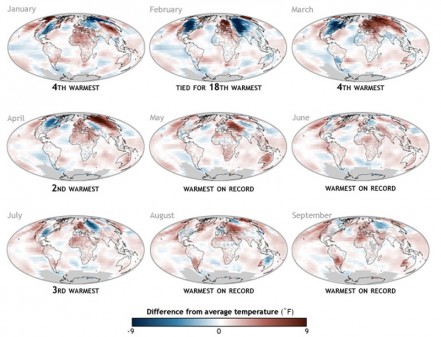 NOAA adds there remains a 60% chance than an El Nino event could develop. The phenomenon occurs every 2-7 years and is characterised by warm temperatures in the central and eastern tropical Pacific.

Last month the World Meteorological Organisation warned concentrations of carbon dioxide, the most prolific greenhouse gas, have risen more in 2013 than any year since 1984.

Its data showed the warming effect on the world’s climate due to greenhouse gases, known as radiative forcing, had risen 34% between 1990 and 2013.

“Carbon dioxide remains in the atmosphere for many hundreds of years and in the ocean for even longer,” said WMO secretary general Michel Jarraud.

“Past, present and future CO2 emissions will have a cumulative impact on both global warming and ocean acidification. The laws of physics are non-negotiable.”

UN envoys are meeting in Bonn this week for the latest round of talks aimed at crafting a global emissions reduction plan.

Countries have been tasked with delivering a draft text of an agreement by December 2014, one year before it is set to be signed in Paris.